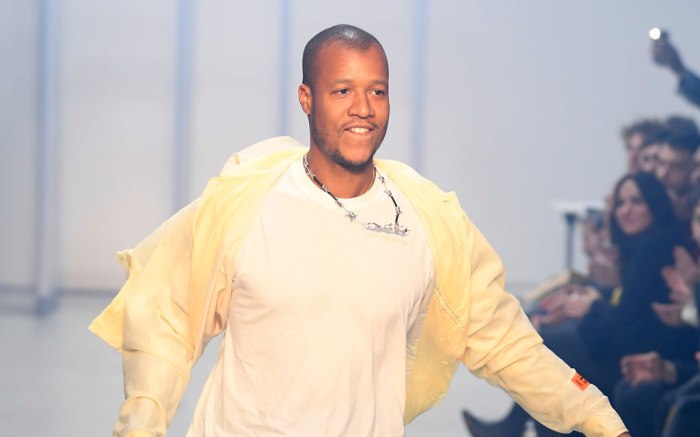 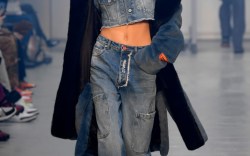 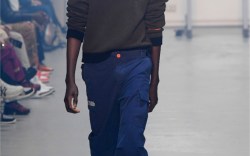 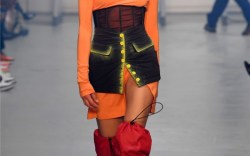 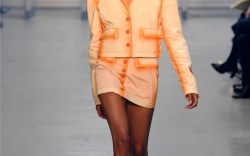 Heron Preston kicked off Paris Fashion Week Men’s today with a bang: The buzzy designer made his runway debut with not one but two footwear collaborations, with Nike and Ugg.

For his travel-inspired show, the designer turned the Palais de Tokyo into an airport security checkpoint, complete with body scanners and metal detectors for luggage. Security cameras monitored every move, broadcasting footage on banks of screens. There were even guards with muzzled dogs checking for illegal substances.

Models breezed through security, but not before they had to place the designer’s new Cube bags on the conveyor belt. Their Nikes and Uggs, fortunately, remained on.

The Nike Huarache sneaker was done in black with red and blue accents, while the Uggs came as boots (there were two styles: a slip-on and a zip-front style) and shoes in black and khaki colorways. They all came with loops at the back printed with the word “pull” — just like the directive seen on a parachute. FN also spotted Preston’s orange Uggs backstage, which didn’t make it onto the runway.

The designer, who has previously collaborated with NASA, told us this season’s inspiration was drawn from his international travels. He’s also experienced his share of overzealous flight security staff. “Once I was wearing a baseball hat that said ‘f**k off’ on the side, and they made me take it off,” he laughed.

He likened the low-top Ugg models to a pair of slippers, which would definitely come in handy for a long flight. He also introduced sneakers from his namesake label, which came in yellow or black with loops at the heel, along with women’s waders that were affixed with drawstring closures.

my first pair of sneakers. Not a collab. Haven't found a name for them yet. What should I call these ?!

And even though Preston’s pal Virgil Abloh’s Off-White show takes place on Thursday, he showed up to lend his support. Alyx designer Matthew Williams also attended; both were members of the erstwhile Been Trill DJ collective. Preston’s brand is also part of the New Guard Group co-owned by Marcelo Burlon, which, incidentally, also owns Off-White.