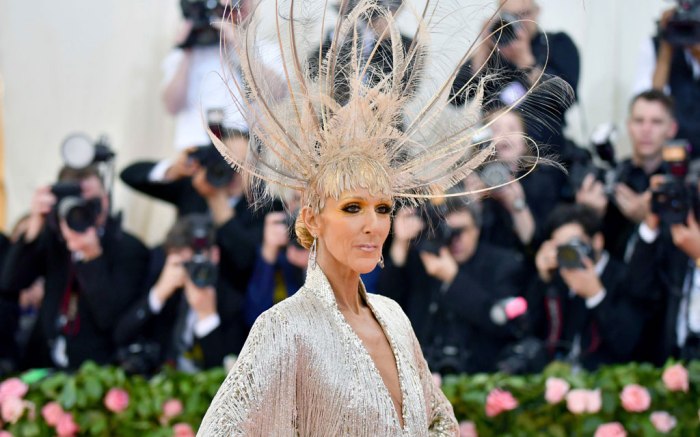 Céline Dion was one of the most anticipated stars at this year’s Met Gala, and she did not disappoint with her look.

The 51-year-old stunned in New York last night on the red carpet in a showgirl-inspired ensemble. She wore a plunging, fringed silver minidress by Oscar de la Renta with T-strap pumps custom-made for her by Chloe Gosselin.

Awarded with FN’s 2018 Emerging Talent award, Gosselin has built up a strong following in just a few years, counting Reese Witherspoon, Nicole Kidman and Keira Knightley among her fans.

But with the Met Gala dubbed the Oscars of Fashion, there’s perhaps no bigger seal of approval for a designer than having a star wear their wares to one of the exclusive events in the industry. Gosselin described seeing her pumps on Dion — from the carpool line in Las Vegas, no less — as “a really great moment.”

Below, Gosselin shares how the collaboration came about, what Dion thought of the shoes and more.

How did this collaboration come about?

“Céline Dion was one of the first customers when I launched my brand and has since continued to be an exceptional support. She would perform live onstage and bring a heightened sense of drama and new life to my initial designs. After developing a close relationship with her team, they asked me about a month and a half ago to create something one-of-a-kind that was inspired by vintage dance shoes with my signature jewel detail, reworked with Swarovski crystals and oversized crystal fringe. It has been an exciting past few weeks. My team and I were ecstatic about the prospect of creating something truly special for her — especially as she is not only someone who I truly admire but is one of the most kind and thoughtful talents.”

What was Dion’s reaction when she saw the shoes?

“Céline and I both live in Las Vegas. I delivered the shoes to her on Friday night, just before she was due to leave for New York. Her reaction was incredible. She opened the box and was immediately in love. I was completely stunned as she used the shoes as a stand-in phone and began to sing “Hello” by Adele. I couldn’t have been more proud in that moment — because the greatest pleasure is when I see someone truly love what I had conceived.”

What went into the design for the shoes? Can you explain the details?

“Céline [and her stylists Sydney Lopez and Pepe Munoz] gathered a highly curated selection of imagery depicting vintage shoes with layers of leather in gold and silver shades. They reached out to me and asked me what my take would be on this kind of style shoe. Céline recently wore one of my new sandals, called Tori, at an appearance, and she loved the jewelry detail. So we thought of integrating it into this completely new idea.”

Everybody’s bff the one & only @celinedion wears our Tori sandals 💗 with this beautiful @emiliawickstead dress 💗 thank you so much to the best duo @sydneylopez & @p.e.p.e.munoz 💗 special thanks to @alanapeden from the @stylecaster for this incredible video 💗 #CelineDion #icon #Shoeaddict #Torisandals #CGheroes #shoes #ChloeGosselin

How were the shoes made? How long did they take to construct?

“The shoes were handmade in Italy by a team of artisans. Every detail was carefully sewn by hand. We documented the full process, as this was truly a special moment for me and one of the highest points in my career. It took about three weeks to be made — from the original ideas  to the first prototypes and the final pair.”

Is this a new style for you? Will you sell it to the public?

“This is a completely new design, and it has been named after Céline. Currently, there is only one existing pair of these shoes, as they have just rocked the carpet at the Met Gala. However, we could see them in one of my collections to come.”

And how did you feel seeing your shoes at the Met Gala?

“Because I’m based in Las Vegas and we are a few hours behind New York, I was picking my daughter up at school during the red carpet arrivals. In the middle of the carpool, all of my closest friends, family and colleagues were texting me and tagging me. It was a really great moment. And I couldn’t have been more proud, especially having my daughter there with me.”

Click through the gallery to see more celebrity arrivals at the 2019 Met Gala.

Below, go behind the scenes with Chloe Gosselin and David Copperfield at the Copperfield Museum.

Oscars, Grammys, Met Gala? Shoe Designers Reveal Which Red Carpet Is the Most Important for Business

Céline Dion Feels Like a ‘Boss’ in $10,000 Crystal-Embellished Stompers on Tour Bus