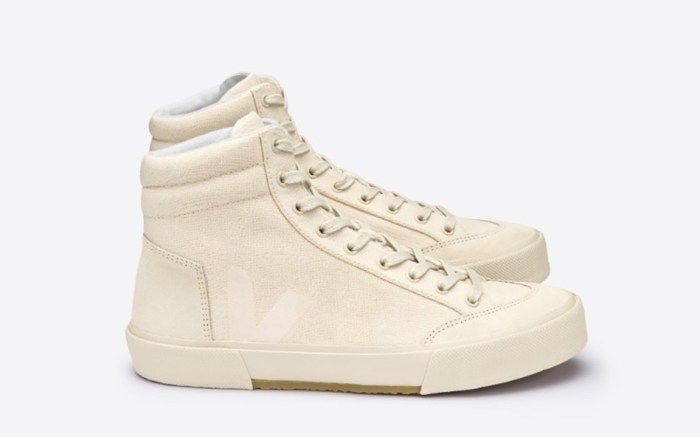 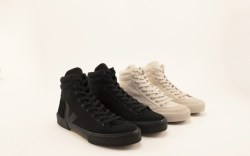 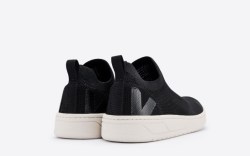 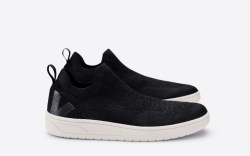 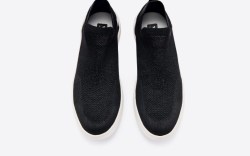 Veja has launched a sneaker collaboration with hip Parisian label Lemaire. The partnership involves two styles. The first, dubbed the Aquashoe, is a mix of a runner, a slipper and a diving shoe made from recycled polyester in 3D effect stitching and comes in black and red colorways. The second, a boot, has a more vintage-inflected vibe, inspired by shoes worn by the Italian military. Both styles are co-branded and bear the signature Veja “V” to one side.

The idea for the collaboration came about when Lemaire founder Christophe Lemaire and Veja co-founder Sébastien Kopp met at a dinner for the charity Greenpeace. “We didn’t know each other, but the flow between us was instant,” said Kopp. “Christophe is obsessed with Chinese slippers, and I’m obsessed with scuba-diving shoes so the Aquashoe is a mix of both.”

“We wanted to have a monochromatic timeless sneaker, as if it had been color dipped so all the trims were the same tone,” added Lemaire who worked as an artistic director at brands including Saint Laurent, Lacoste, Hermes and Uniqlo before reviving his own eponymous line.

Veja easily outranks Nike on the streets of Paris, however, it has also secured a firm foothold on an international scale. After Meghan Markle wore a pair of Veja sneakers during her official tour of Australia with Prince Harry, global search engine Lyst ranked the label’s V10 sneaker as the third hottest product for women for the final quarter of 2018.

And while this is certainly a testament to the power of a celebrity endorsement, it is also an indication that consumers are becoming increasingly concerned with issues of sustainability and transparency. It was, in fact, the ecologically sound production processes and materials used by that the sustainable French label, that was a major attraction for Lemaire.

Veja sneakers are made from sustainable leather, organic cotton and wild rubber from the Amazonian forest. The company works closely with cooperatives of small producers in Brazil, endeavoring to support local communities while using upcycled and sustainably produced materials.

Likewise, Rick Owens, whose label Veja also joined forces with in January. Veja premiered a new co-designed 100 percent vegan performance runner on Owens’ fall ’19 runway during Paris Men’s Fashion Week — the L.A. based designer calling it out as “the most environmentally friendly sportswear company I could find.”

Veja launched a similar all-vegan runner silhouette called La Rio Branco under its own label on Feb. 14 to celebrate Valentine’s Day. The upper is constructed from a mesh layered over a base made from recycled plastic bottles.