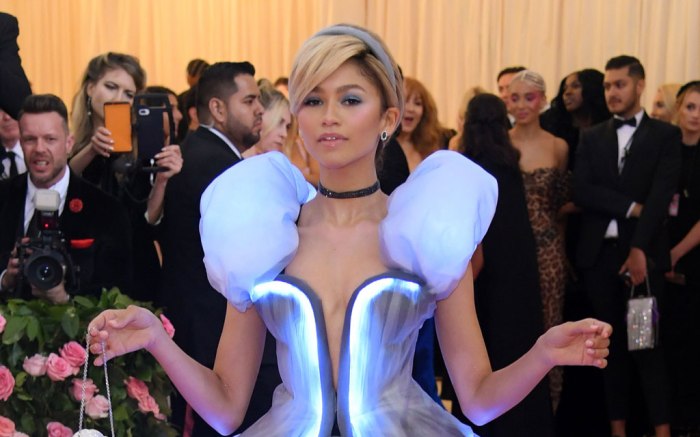 The 22-year-old dressed up as Cinderella, wearing an elaborate light-up blue ballgown inspired by the look worn by the character in the classic Disney film.

While the “Greatest Showman” star’s shoes weren’t visible under her voluminous gown, she still played off the lost shoe trope from the movie — dropping a shoe on the red carpet (re-imagining a scene where Cinderella’s glass slipper falls off her foot while leaving the prince’s ball).

Zendaya’s stylist, Law Roach, dressed up as the fairy godmother and put a spell on her as she walked the red carpet. To the extent that camp implies a certain flair for the dramatic, the actress nailed it.

The look is from Tommy Hilfiger, with whom Zendaya collaborated on a see-now, buy-now collection last season.

She tied things together with a blond updo closely mirroring Cinderella’s famous hairstyle, and Zendaya carried a sparkly pumpkin-shaped clutch.

Lady Gaga is one of the hosts of this year’s Met Gala, alongside “Sign of the Times” singer Harry Styles and 23-time Grand Slam tennis champion Serena Williams. The theme is a play on a Susan Sontag essay from the ’60s.