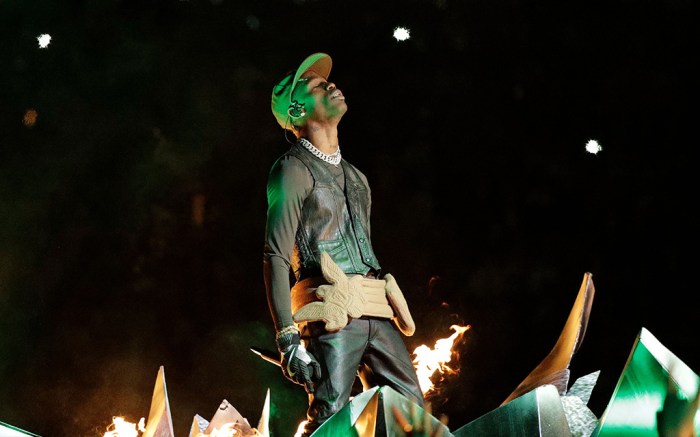 The “Stargazing” rapper took to the Mercedes-Benz Stadium stage in Atlanta while clad in unreleased Air Jordan 6 “Cactus Jack” sneakers.

The shoes are an olive-green colorway with black, infrared and gray accents. They feature a military-inspired pouch at the side of the collar.

Scott paired the kicks with a mesh top, a leather vest and slim-fitting black leather trousers. He wore an edgy tan fanny pack belted around his waist.

The 26-year-old performed his hit “Sicko Mode” onstage, where he appeared alongside Maroon 5 and Outkast member Big Boi.

Maroon 5 frontman Adam Levine nodded to Scott with his footwear choice, stepping onstage in a pair of Air Jordan 1 x Travis Scott “Mocha” sneakers. The “Girls Like You” singer teamed his kicks with slim-fitting pants and a black windbreaker with orange and pink detailing.

This marks the second year in a row that the halftime performers donned Jordan Brand sneakers during the big game.

At Super Bowl 52 between the New England Patriots and Philadelphia Eagles last year, Justin Timberlake performed in personalized Air Jordan 3 “JTH” sneakers, which dropped via Nike SNKRS following the first touchdown of the second half.

The kicks sold out almost instantaneously, with styles selling for more than $2,000 on eBay just days later.

See the most iconic fashion moments at the Super Bowl through the years by clicking through the gallery.