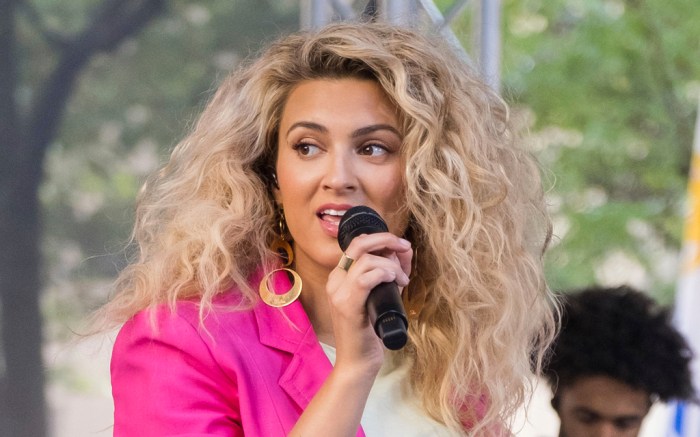 Tori Kelly took to the “Today” show this morning to perform some of her biggest hit songs as well as debut new tunes from her latest album, “Inspired By True Events.”

For the performance, Kelly wore a bright pink blazer over a white tee and black jean shorts, all with her hair in her signature natural curls.

For footwear, the 26-year-old chose a set of patent leather all-white booties with a pointed toe, thin heel and zip-front feature — a purposeful choice that makes it easier for performers to make quick outfit changes.

Kelly joins the list of celebrities who have forgone light sandals for leather boots this summer including Gigi and Bella Hadid and Olivia Culpo.

The Grammy-winning artist spoke to FN back in 2015, and despite her stylish white boots for the performance, she’s secretly a sneakerhead. “I love a good pair of Nikes. I’m big on comfort,” said Kelly. “With performing and everything, I need to not think about what my feet are doing. So I’m big on the comfort level.”

The former “American Idol” semifinalist sang top songs like “Nobody Love” and “Language” before discussing her new album with the hosts of the talk show.

"This is by far my most vulnerable album," @torikelly says about "Inspired by True Events" #ToriKellyTODAY pic.twitter.com/rLGJrchQuy

Leading up to the release of “Inspired by True Events,” the singer teased fans with a few throwback videos of a then-brunette young Kelly singing for the cameras.

She also shared a collection of old home clips mixed with newer footage for the album release, saying in the caption: “It still blows my mind that a song starts from nothing & then becomes this thing that people can connect to.. & that’s what i hope these songs become.”

#InspiredByTrueEvents is actually here…. this album has been in the making over the last few years & now it’s available for you to listen to. it still blows my mind that a song starts from nothing & then becomes this thing that people can connect to.. & that’s what i hope these songs become. this is by far the most vulnerable i’ve ever been in my music & even though it was a little scary, i know it’s exactly where i needed to be for this chapter of my life. i love you guys! thank you for listening & i hope you enjoy🥀🎬🎞 #TK3

Click through the gallery to see more stars that have chosen to wear boots during the summer heat.