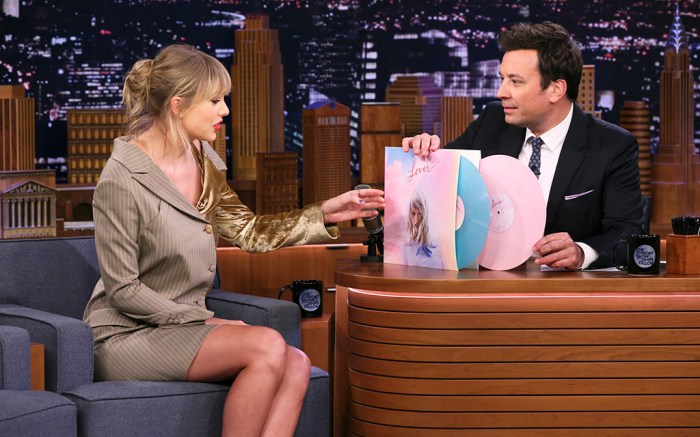 Swift paired her Louboutins with a two-toned blazer dress from Each Other’s pre-fall ’19 collection. The pump’s goldtone studs were an apt match to the color. Her lip color also matched the bottom of her shoes.

The star is a fan of Christian Louboutin. She recently wore the luxury label in her music video “You Need to Calm Down” and to the 2019 MTV VMA’s.

The singer made an appearance on the show to talk about her latest album “Lover” as well as her upcoming performance on “Saturday Night Live.”

Of course, during her appearance banter with Fallon, hilarity ensued. While discussing Swift’s recovery from Lasik eye surgery, Fallon played a home video filmed by the pop star’s mother. The video, which has since gone viral, shows the singer dramatically peeling and eating a banana.

Fallon and Swift also played the Name That Song challenge, a popular segment of the late-night show. Later in the episode, indie singer Angel Olsen performed.