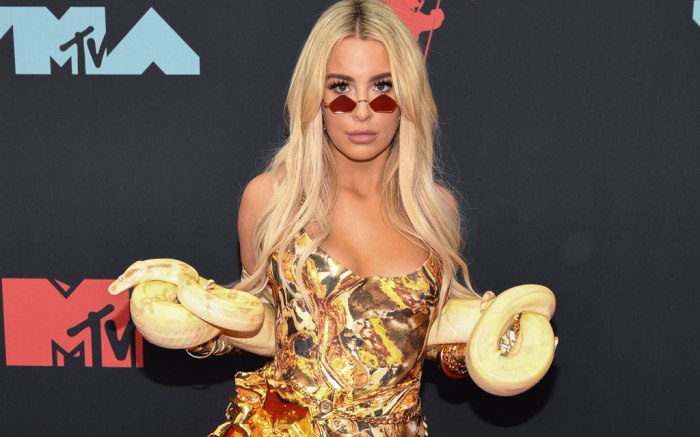 Britney Spears made history when she brought a live python onstage with her at the 2001 MTV Video Music Awards — and almost two decades later, Tana Mongeau is taking notes.

The 21-year-old YouTuber hit the red carpet at tonight’s VMAs in Newark, N.J., clad in a printed minidress with matching thigh-high boots. Mongeau accessorized her look with gold Chanel chains, red-tinted sunglasses and, of course, a live snake.

In a move that’s no doubt inspired many a Halloween costume, Spears surprised the audience at the 2001 VMAs when she brought out a snake during a performance of her hit “I’m a Slave 4 U.” The hitmaker was clad in a green crop top, embellished hot pants and beige mid-calf boots for the performance.

Mongeau is hardly the only celebrity to make an impression on the red carpet at the Prudential Center tonight. Other stars already in attendance at the VMAs include Taylor Swift, Lizzo and Megan Thee Stallion. All of them are clad in looks complete with embellishment, with Swift and Lizzo also incorporating bright colors into their outfits. Comedian Sebastian Maniscalco is hosting this year’s awards; Swift and Ariana Grande lead the nominations with 10 each.

Flip through the gallery to see more celebrities arriving on the red carpet at the 2019 MTV VMAs.

Watch the video below to go behind-the-scenes at Meek Mill’s FN cover shoot.