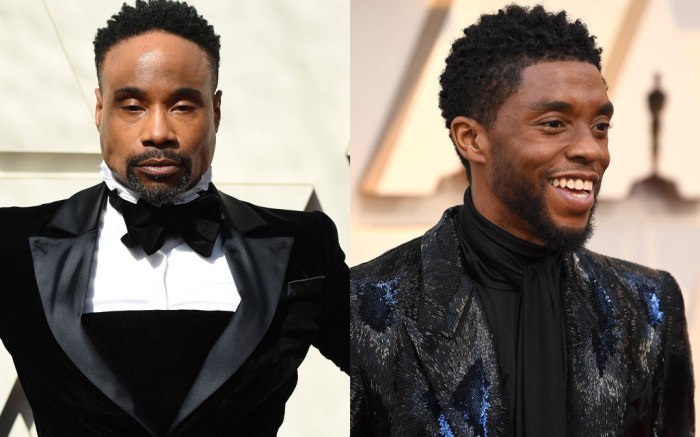 The Academy Awards is perhaps the most formal of all awards shows — which means the Oscars red carpet looks tend to be glamorous but safe.

Billy Porter bucked convention in a big way, stepping out tonight in L.A. wearing a Christian Siriano tuxedo gown. The actor’s gender nonconformist look was custom-made for him by Siriano. While his footwear was hidden underneath the gown, Porter added some sparkle with his accessories, choosing Oscar Heyman & Bros. jewels.

Chadwick Boseman, too, bucked convention with his red carpet look. The “Black Panther” star wore wide-legged black pants with a sequined train, which he paired with a sequined blazer. For footwear, Boseman chose black dress shoes with a slightly pointed toe.

Elsewhere, Adam Lambert made a stylish arrival in a Tom Ford suit and shiny black shoes, pinning a white orchid to his lapel. The “American Idol” alum will open the Oscars alongside his Queen bandmates.

Jason Momoa made a splash in a rose-colored suit with a black racing stripe going down the pant leg, which he teamed with burgundy boots. The “Aquaman” actor was joined by wife Lisa Bonet, who matched her dress to her husband’s suit.

But not every successful men’s look broke the mold.

Rami Malek, the frontrunner for the Best Actor award, cut a stylish figure in a classic black tuxedo.