Sparkly Looks Are Trending on the Golden Globes Red Carpet 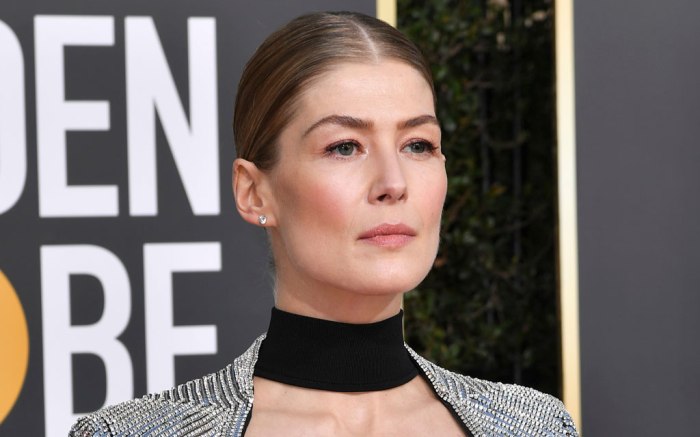 Sparkly looks were all over the place at tonight’s Golden Globe Awards in Los Angeles.

Rosamund Pike upgraded a black dress with a sparkly silver jacket that was draped around her shoulders. Nominated for Best Actress in a Dramatic Motion-Picture for her role in “A Private War,” Pike wore a black gown with cut-out detailing.

Felicity Huffman went with a similar look: She shimmered in a silver gown with a plunging neckline and fringe detailing. Like Russell, she selected silver sandals for footwear.

Kristin Cavallari shined in a nude-illusion dress. The shoe designer sported a gown by Amen with gold embellishment, long sleeves and a high neckline. While her dress went down to the floor, her soaring heels were just visible through the sheer fabric of her gown.

Meanwhile, Regina King — nominated for Best Supporting Actress for her role in “If Beale Street Could Talk” — was stylish in a blush-colored embellished gown by Alberta Ferretti. The dress featured a strapless neckline and disco-ball like sequin detailing.

Opting for a subtler sparkly dress was Linda Cardellini. The “Mad Men” actress wore a Monique Lhuillier gown with embellishment at the bodice and a tulle skirt.

Click through the gallery to see more stars arriving at the 2019 Golden Globes.