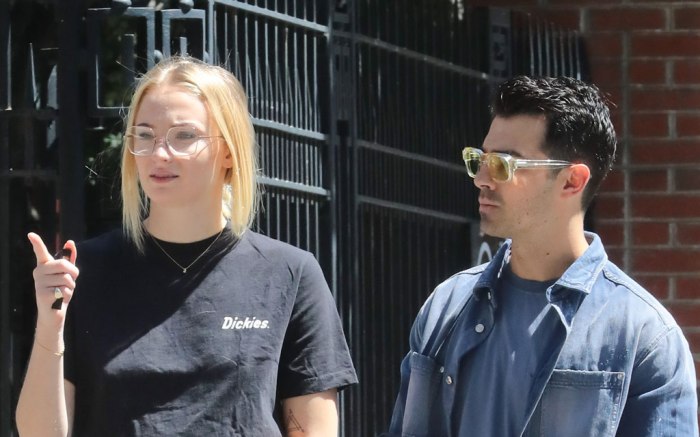 Socks and sandals together is often thought of as a big fashion no-no — but Sophie Turner is a fan.

The 23-year-old paired Adidas slides with black crew socks today while out and about with husband Joe Jonas in New York. She wore the footwear along with a black Dickies T-shirt and high-waisted denim shorts. Meanwhile, Jonas sported denim on denim with Dior sneakers.

Turner’s sandals were Adidas’ classic Adilette, a sporty-looking pool slide that debuted in 1972. The style has a contoured footbed and the German sportswear brand’s signature three stripes across the front. Adidas.com has the shoes in stock for $45.

While they’ve long been considered a fashion faux pas, socks with sandals have roots that go back to the Romans sometime between 250 and 420 A.D. The combination has also been elevated to chic heights in recent seasons; for instance, designer Anna Sui paired her Teva sandal collaboration with floral socks on the runway at her spring ’19 New York Fashion Week show.

Turner herself has stepped out in socks with sandals multiple times in recent weeks, including the same pair of Adilettes. She says she’s a big fan of the combo not because of its stylishness, however, but rather for its comfort. On an Aug. 22 tweet saying she was “attempting to make this controversial trend happen,” Turner said she wasn’t trying to bring anything back.

Nah we’ve all been taking out the trash like this for years and you know it. I’m not trying to make anything happen other than giving my feet some much needed TLC. https://t.co/BLmptmDizs

“Nah we’ve all been taking out the trash like this for years and you know it. I’m not trying to make anything happen other than giving my feet some much needed TLC,” she wrote.

Turner’s not the only one to give her feet a break in this way. Other A-listers to give the socks-and-slides pairing a go include Kanye West, A$AP Rocky and Rihanna.

Flip through the gallery to see more of Sophie Turner’s street style outfits.

Below, designer Kenneth Cole discusses how to succeed in fashion, building a brand and more.