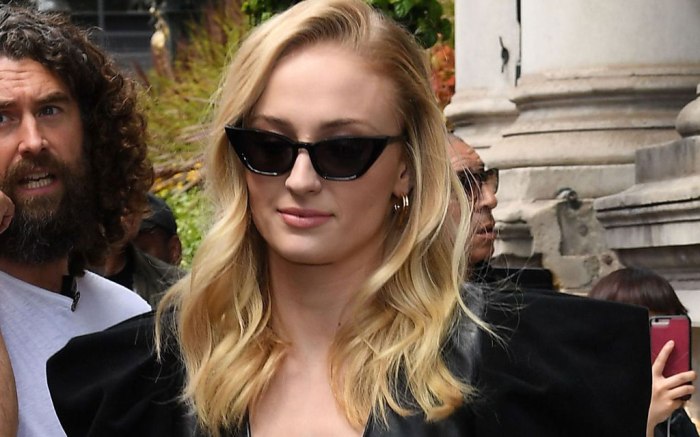 “Game of Thrones” may be over, but Sophie Turner is still plenty busy.

The 23-year-old taped an episode of the “The Late Late Show with James Corden” in London today, wearing an edgy black and gray outfit.

From top to toe, Turner wore pieces from Isabel Marant’s fall ’19 collection. She wore a long-sleeved black top, dubbed the Dexton, with a plunging neckline, puff sleeves and leather detailing at the midriff. For pants, the actress went with slim-fitting gray Dominic jeans.

Her shoes were black boots with an almond-shaped toe and a conical heel.

The star pulled together her look with black cat-eye shades and teensy hoop earrings. She wore her blond hair in loose waves.

The A-lister was joined by her “X-Men: Dark Phoenix” co-stars, Jessica Chastain, Alexandra Shipp, James McAvoy and Michael Fassbender. They filmed a segment for “The Late Late Show” wherein they joined Corden on a tour bus branded with the late-night show’s likeness.

“Dark Phoenix” releases in the U.S. on June 7, serving as the 7th installment in the “X-Men” franchise.

Click through the gallery to see more of Sophie Turner’s street style looks.

Watch the video to see how Carrie Dragshaw puts together looks inspired by Carrie Bradshaw’s wardrobe.