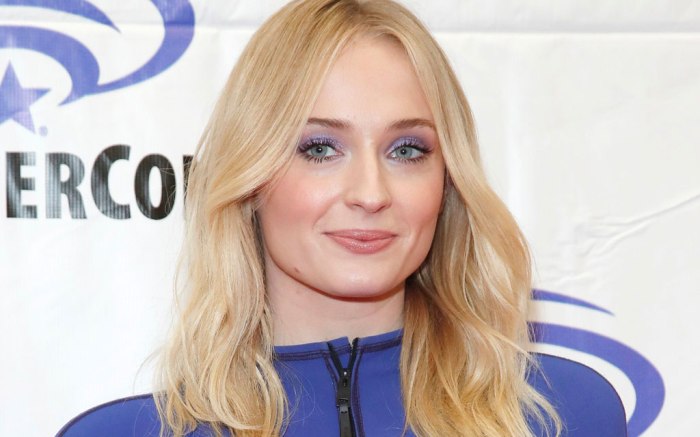 Sophie Turner’s latest look was all about the legs.

The 23-year-old wowed in a teensy minidress and boots as she appeared to promote “Dark Phoenix” at WonderCon at the Anaheim Convention Center in Anaheim, Calif., yesterday.

Turner sported a electric blue minidress with long sleeves and exposed zipper detailing going down the front. The dress featured a high neckline and contrasting black stitching on the arms and bodice.

For footwear, the “Game of Thrones” star went with lace-up boots featuring a ridged outsole and a block heel. The edgy boots got a feminine edge with a floral pattern — done in blue and white to match Turner’s dress.

As for her beauty look, the actress chose sparkly purple eye shadow and a glossy pink lip. She wore her blond hair in loose waves.

Apart from acting, Turner has a strong hold on the fashion industry. In addition to frequently making headlines for her unique street style, the star is a muse to Louis Vuitton creative director Nicolas Ghesquiere and appears in campaigns for the French label.

The English beauty was joined on the red carpet by Alexandra Shipp, who also appears in “Dark Phoenix.” Shipp looked stylish in an asymmetrical white dress with a low neckline and belted waist. Her shoes were pointy-toed leopard-print pumps, which had a stiletto heel and a low cut at the sides, exposing more of the foot.

Click through the gallery to view Sophie Turner’s street style.

Sophie Turner and Joe Jonas Stroll Through New York in $2,000 Worth of Designer Shoes