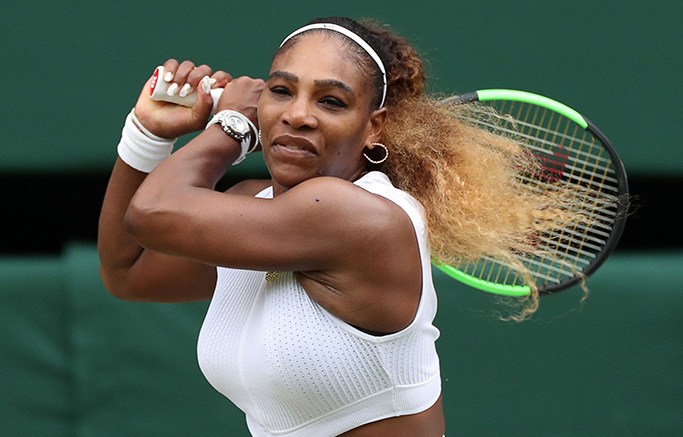 Today was a big day for Serena Williams. In addition to securing her place in the Wimbledon semifinals, the 37-year-old feted the release of her cover for the August issue of Harper’s Bazaar.

On the cover, Williams glistens in a sparkly gold Ralph Lauren cape, which puts her long legs on full display. For footwear, the tennis star sports strappy gold sandals from Christian Louboutin, which boast a stiletto heel and the brand’s signature red sole.

In a second cover shot, the 23-time Grand Slam champion smiles in a sequined Stella McCartney dress teamed with big hair and Tiffany & Co. jewels. Williams revealed to fans that the photos were not retouched.

To accompany the photos, the longtime Nike-sponsored star penned an essay for Harper’s Bazaar. In the emotional piece, Williams addressed the 2018 U.S. Open final — speaking candidly about her emotions surrounding the match.

In the final, Williams lost a game after arguing with the referee, prompting an international discussion about the unequal treatment of women in the sport of tennis. The controversy overshadowed Naomi Osaka’s win.

“This debacle ruined something that should have been amazing and historic. Not only was a game taken from me but a defining, triumphant moment was taken from another player, something she should remember as one of the happiest memories in her long and successful career. My heart broke,” she wrote. “Days passed, and I still couldn’t find peace. I started seeing a therapist… Finally I realized that there was only one way for me to move forward. It was time for me to apologize to the person who deserved it the most.”

The all-time great said the controversial U.S. Open moment “exemplified how thousands of women in every area of the workforce are treated every day,” adding that she “won’t ever stop raising my voice against injustice.”

“I’ve been called every name in the book. I’ve been shamed because of my body shape. I’ve been paid unequally because of my sex. I’ve been penalized a game in the final of a major because I expressed my opinion or grunted too loudly,” Williams wrote. “In short, it’s never been easy. But then I think of the next girl who is going to come along who looks like me, and I hope, ‘Maybe, just maybe, my voice will help her.’”

Williams also shared an image from the shoot to her Instagram page, picking one where she’s clad in a Tom Ford minidress and gold Devious ankle-strap sandals.

Flip through the gallery to see Serena Williams’ on-court style.