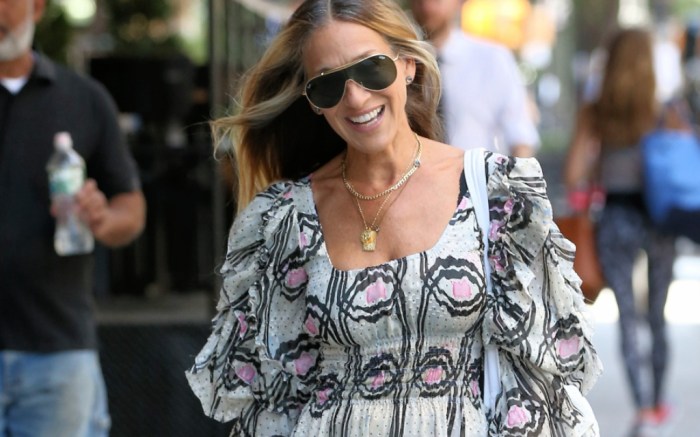 Sarah Jessica Parker looked straight out of a scene from “Sex and the City” yesterday as she was snapped on her way to The Greenwich Hotel in New York for a luncheon with former first lady Michelle Obama.

The 54-year-old actress-shoe designer showed off a graphic-print maxi dress featuring a shirred bodice, puffy sleeves and tiered ruffle detailing around the skirt. She paired the frock with her brand’s “Celine” Mary-Jane block heels that are designed with a taupe satin upper, an almond toe and a jeweled brooch accent.

Parker recently opened up about experiencing sexual harassment on the set of HBO’s iconic “Sex and the City,” which she starred in from 1998 to 2004.

“I think no matter how evolved or how modern I thought I was, I didn’t feel entirely in a position — no matter what my role was onset — I didn’t feel as powerful as the man who was behaving inappropriately,” she shared, “which just strikes me as stunning to say out loud, because there were plenty of occasions where it was happening and I was in a different position and I was as powerful.”

Flip through the gallery to see Sarah Jessica Parker’s most beautiful shoes over the years.

Sarah Jessica Parker’s Advice for the Next Generation of Female Entrepreneurs, Businesswomen