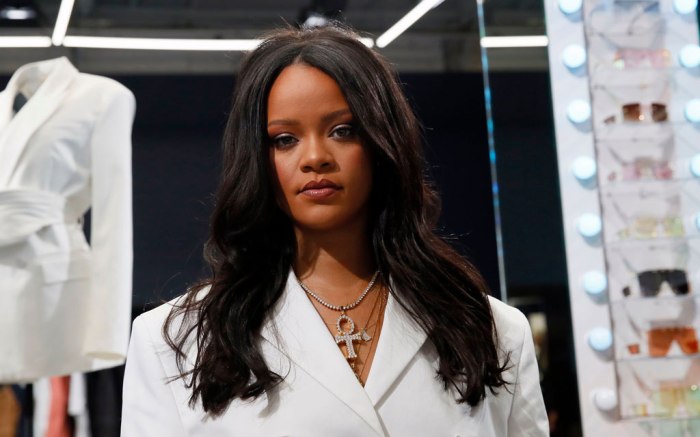 Rihanna put the ultimate “it” girl twist on businesswoman dressing at the Paris launch of her new Fenty label last night.

The 31-year-old wore a leggy white blazer dress with long sleeves and buttons going up the front.

For footwear, the “Work” singer opted for pale brown sandals that nearly blended into her skin for flattering, leg-lengthening effect. The sandals featured a soaring stiletto heel and a pointed silhouette. The “Love on the Brain” hitmaker added a little sparkle to her look with an anklet and several pendant necklaces.

Both the dress and heels are part of the debut Fenty collection — filled with a masculine-feminine mix of tailoring and corsetry that epitomizes Rihanna’s personal style ethos.

“I love to dress in men’s clothing, and clothing that’s inspired by men’s clothing, but I also love to put on a gown and a slip and a heel and an earring, and so I just like to put those two things together all the time,” she told WWD. “Every time I dress, it’s like a little bit of two things or three worlds together, and so it had to be reflected here.“

With Fenty, which operates under luxury fashion conglomerate LVMH, Rihanna made history. The designer is the first woman to launch an original brand at LVMH and the first person of color to run a brand at the fashion house.

The collection will be available online May 29, rolling out in 14 countries including the U.S. New wares will drop every four weeks or so. The aim will be to sell out on each run, and discounts will not be offered on product.

Flip through the gallery to see times Rihanna took fashion risks that paid off.

Watch the video below to see Rihanna’s speech at the 2016 FNAAs.

A Look at the Shoes in Rihanna’s Fenty Collection

How Rihanna Has Styled Her Fenty Brand Through the Years