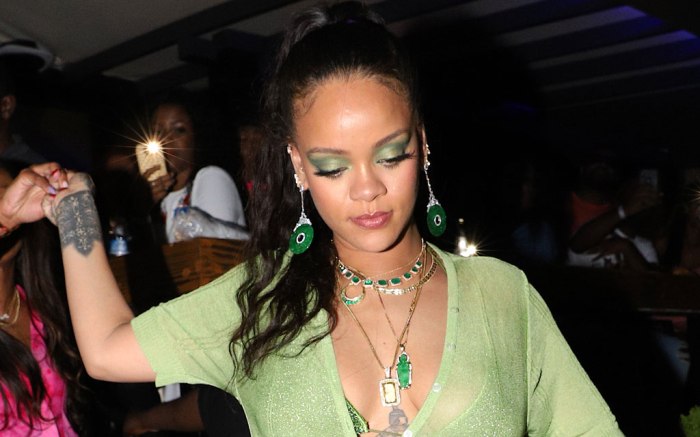 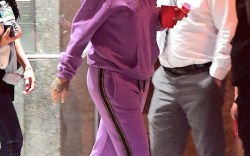 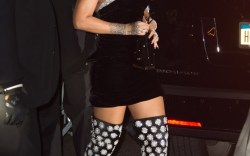 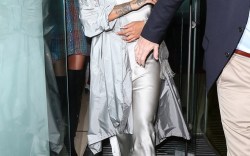 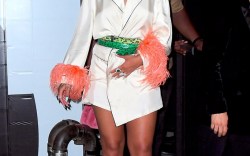 The “Love on the Brain” singer stepped out to a club in Barbados wearing a laidback ensemble complete with green eyeshadow and heels from the rising shoe designer.

For footwear, the Fenty Beauty mogul reached for shoes by Amina Muaddi — a buzzy, young designer who launched her eponymous label last year after breaking away from Oscar Tiye, a brand she co-founded. Rihanna’s choice was Muaddi’s Naima leather sandal, a slip-on style that boasts a 3.8-inch heel and a toe strap. The Italian-made shoe retails for $665.

When Muaddi’s first see, now, buy, now-collection launched this fall, the fashion world took notice. The 32-year-old’s success was awarded with FN’s Launch of the Year honor at the 2018 FN Achievement Awards.

“For a girl who comes where I come from — I’m half Jordanian and half Romanian — to be here, to be able to live my dreams and inspire Middle Eastern women to live their own dreams and be able to dress women I could have never imagined I’d be able to dress, it’s an honor,” she explained in an emotional speech at the awards show.

Muaddi’s Naima style appears to be a new go-to for Rihanna, as she was spotted out in New York this month clad in a chic black coat with the sandals.

The 31-year-old hitmaker has significant experience of her own in the fashion industry — she has her own Savage x Fenty lingerie company as well as a Puma sneaker deal — and she’s even a FNAA winner herself, having been honored with the Shoe of the Year award in 2016. The star nabbed the honor for her Fenty x Puma creeper, becoming the first woman to ever win for Shoe of the Year.

Flip through the gallery for more of Rihanna’s clubbing style.

Watch the video below for highlights from the 2018 FNAAs.