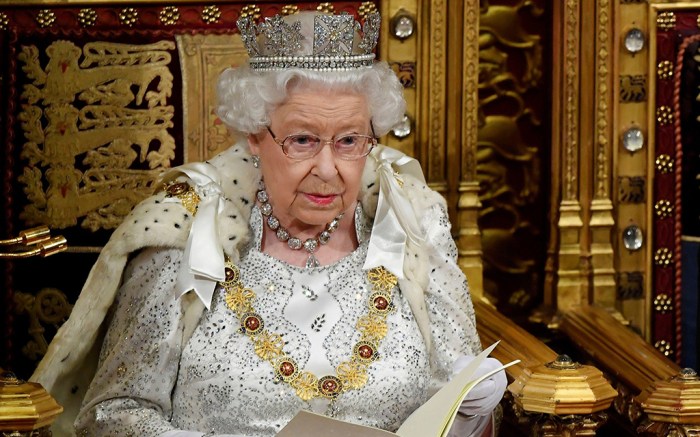 Queen Elizabeth II wore her favorite shoes for ceremonial engagements today as she delivered a speech during the official State Opening of Parliament in London.

The 93-year-old shimmered from head to toe with a white dress embellished with ornate beading and the glimmer extended to her feet and her silver metallic T-strap pumps, with a semi-round toe on a block heel. Her jewelry also matched the outfit’s luster, including a necklace of large jewels and a crown encrusted in diamonds and pearls.

While the Queen performed her duties in London, her grandson Prince William and his wife, Kate Middleton, performed their own in far-off Pakistan, where the royal couple landed today at the start of a five-day tour of the country.

To no one’s surprise, the Duchess of Cambridge arrived looking impeccably chic in an ombré blue Catherine Walker dress and matching pants. Completing the look was a pair of Rupert Sanderson pumps in nude. The luxury label’s Mallory pumps incorporated a pointed-toe profile on a 4-inch stiletto heel. The shoes retail for nearly $600 at the current exchange rate on Rupertsanderson.com.