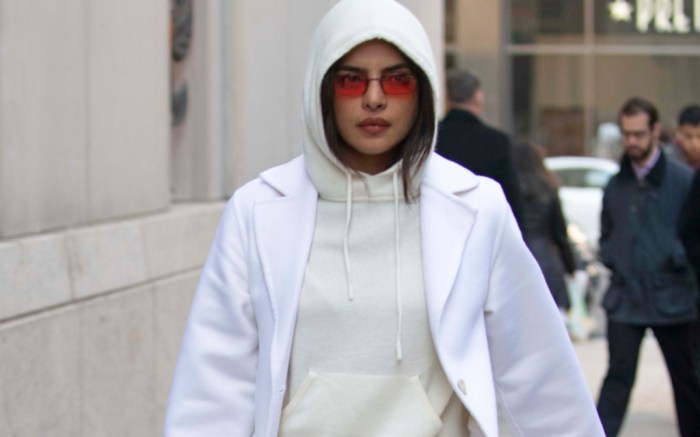 Priyanka Chopra was either trying to go unnoticed or stand out when she hit the streets of Manhattan on Monday. Either way, she caught our attention. The former “Quantico” actress looked as though she were trying to go under the radar by wearing her hood up and a pair of hot-pink tinted sunglasses. But then again, she turned heads in a chic monochromatic look that involved shades of ivory, beige and cream.

She was seen sporting a cream-hued hooded sweatshirt with matching wide-leg pants (that were cinched at the ankles) underneath a long white wool coat. She completed her cozy ensemble with a beige leather tote bag by Akris and matching boots featuring a pointed toe and stiletto heel.

This outing comes on the heels of new husband Nick Jonas gifting her a nearly $200,000 Mercedes Maybach this week. “When the hubby goes number one.. the wifey gets a @maybach!! Introducing…Extra Chopra Jonas…haha…I love you baby!! Yaaay! Best husband ever…@nickjonas 😍❤️💋,” she captioned the post.

Flip through the gallery for more of Priyanka Chopra’s street-style looks.