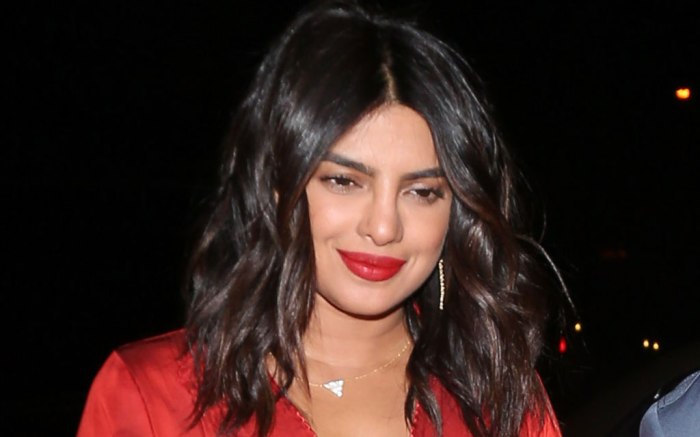 Priyanka Chopra is one of Hollywood’s biggest style stars — and she proved why with her latest look.

The “Sky Is Pink” actress put together a chic ensemble as she and husband Nick Jonas were out and about in Los Angeles last night.

Chopra wore a little red wrap dress with long sleeves and a ruffled skirt. For footwear, the 2000 Miss World went for one of fall’s hottest boot trends: knee-highs. While booties and thigh-highs have reigned supreme in recent seasons, fall ’19 sees a return of the knee-high boot. Chopra’s boots by Paige, in cognac suede, featured a 3.35-inch stacked heel and a pointed toe. The lifestyle brand’s Carmen boot retails for nearly $500 on Paige.com.

The A-lister completed her outfit with a tan mini bag and delicate gold jewelry. She wore her hair down and opted for bold red lips that matched her minidress.

Meanwhile, Jonas showed off his own style chops. The “Jealous” pop star wore a steel blue jacket and pants with a matching blue sweater underneath. His shoes were black leather platform loafers with a trendy, ’90s-inspired square toe.

The duo was spotted en route to Craig’s in West Hollywood, Calif., where they celebrated the Jonas Brothers’ L.A. concert. Brothers Nick and Kevin were also present, as well as Kevin’s wife, Danielle.

Flip through the gallery to check out more of Priyanka Chopra’s street style.