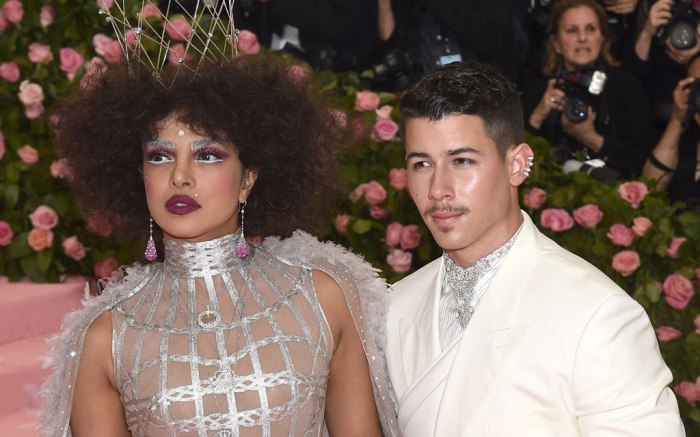 Priyanka Chopra went for a kooky look on the red carpet at the 2019 Met Gala in New York tonight.

The 36-year-old sported a Dior gown with sheer detailing at the bodice, rainbow feathers on the skirt and a daring thigh-high slit. On her feet, she sported silver pointy-toed pumps. The “Quantico” actress wore her hair teased and accessorized with a dramatic crown headdress.

She was accompanied on the red carpet by her husband, Nick Jonas, who looked dapper in a white suit. Like his wife, the 26-year-old wore sparkly silver shoes, choosing Christian Louboutin’s Lord Cubano style set on a nearly 2.5-inch heel.

The duo walked the red carpet at the Met Gala together in 2017 prior to their marriage. That year, both wore Ralph Lauren, with Chopra commanding attention in a dramatic trench coat-inspired gown.

Lady Gaga is one of the hosts of the Met Gala, alongside “Sign of the Times” singer Harry Styles and 23-time Grand Slam tennis champion Serena Williams. The theme is “Camp: Notes on Fashion” — a play on a Susan Sontag essay from the ’60s.