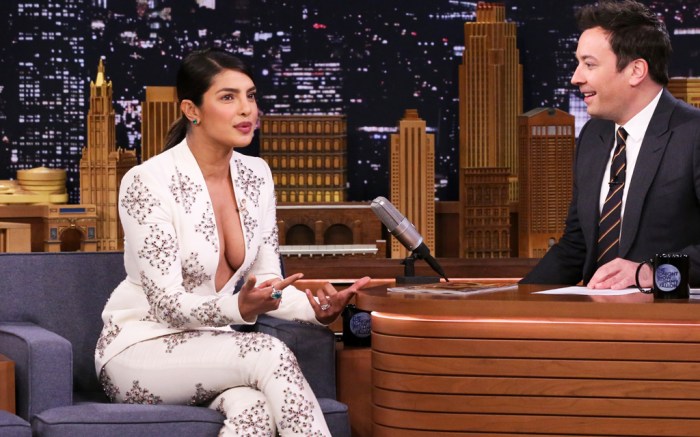 Priyanka Chopra is making her rounds across New York this week promoting her upcoming film “Isn’t It Romantic.”

The Bollywood star appeared on “The Tonight Show Starring Jimmy Fallon” last night wearing a monochromatic look with a noticeably low-cut top. The white ensemble was coated in multicolored and patterned embellishments, contrasted with her Lorraine Schwartz emerald jewelry.

The newly married Chopra paired the look with a set of pointed-toe white satin heels. She shared the ensemble on her personal Instagram and said: “When you pose too hard…#beforeandafter.”

When you pose too hard…#beforeandafter Tune into @fallontonight tonight! @jimmyfallon missed our food challenge, but there was so much to catch up on. Always the best seeing you! ❤️ to @theroots

Just this morning, the actress wore a similar style suit for an appearance on “Good Morning America.” This time, she wore a top under her blazer, which again was white and patterned with multicolor designs.

Her shoes were a poignant red stiletto with a pointed toe and a tall heel. Earlier in the day Tuesday, she chose yet another monochromatic look as she made her way around the Big Apple.

Her outfit consisted of a tan turtleneck, a tan trench and a pair of jeans finished off with a Fendi belt.

Her boots perfectly matched her coat and top, as they were a nude knee-high suede and heeled pair. The final touch of the day was her neon yellow and clear sunglasses.

Click through the gallery to see some of Priyanka Chopra’s best street style looks.