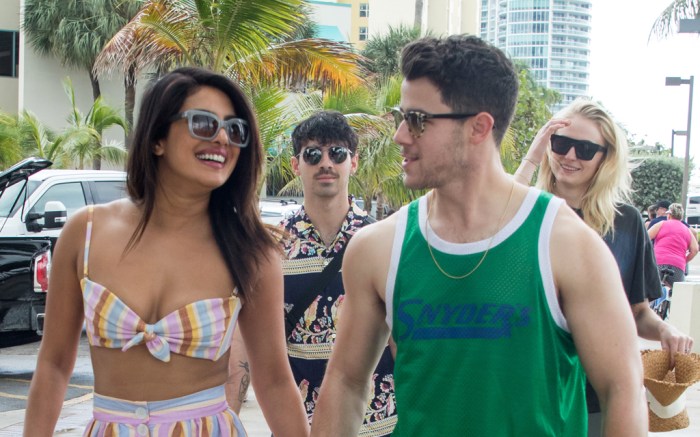 The Jonas Brothers coupled up in Miami today after filming a new music video for an unreleased song.

Nick Jonas stepped out with his wife, Priyanka Chopra, as well as his brother Joe Jonas and his fiancée, Sophie Turner, to spend a day soaking in the warm Florida weather.

Chopra went for a boldly striped set from Montce Swim, while Nick went all green in a tank and Onia swim shorts.

For footwear, Priyanka had on a set of square-toe sandals, and Nick went for matching Le Tigre green rubber slides with a tiger logo on top.

Joe chose a tropical short-sleeve button-down top with board shorts and a Louis Vuitton duffle. His bride-to-be had on a gray T-shirt with biker shorts and a floppy hat to protect her from the sun.

On Joe’s feet was a pair of white sneakers with a red accent; Sophie chose a set of black slides.

The couples explored the city after the Jonas Brothers were seen filming what appeared to be a new music video along the Miami shore. They then joined the eldest brother, Kevin, for a boat ride.