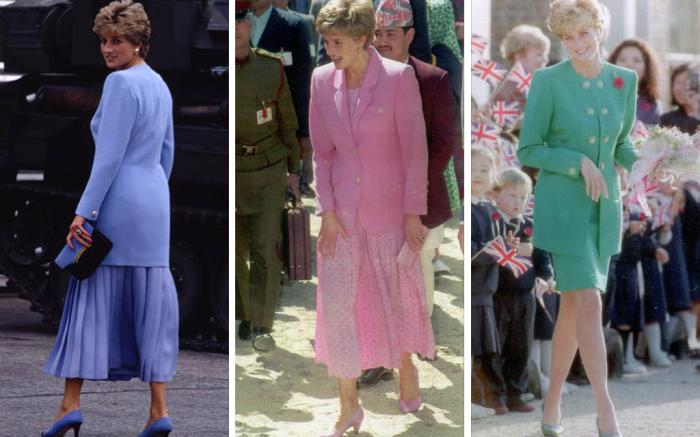 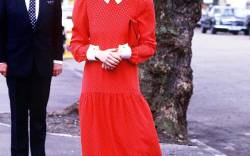 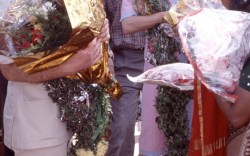 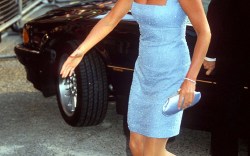 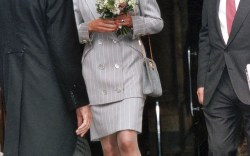 Today marks Princess Diana’s birthday. Known as the most photographed woman in the world, Diana quickly became a style icon during her time in the British royal family and long after her divorce from Prince Charles. Born on July 1, 1961, the Peoples’ Princess would have turned 58.

Through the years, Diana was frequently spotted in matching head-to-toe looks proving she was a master at nailing monochromatic dressing. She often wore kitten heels and would match her shoes to her outfits. Diana wasn’t afraid of color, either. She was a fan of donning hues of green, red, pink and blue.

In 1984, for instance, she stepped out in one of her most memorable looks, wearing a red long-sleeved dress with red bow-embellished heels, after giving birth to Prince Harry.

More than a decade later, the Princess of Wales was still dressing in monochromatic red. In 1995, she wore a chic minidress to a charity event in Argentina, paired with slingback pointed-toe heels and a matching red clutch.

Green was certainly a go-to for Princess Diana, too. In 1992, she was spotted wearing the same look twice. She wore the classic green dress with matching jacket, and she coordinated with green heels, for appearances in Paris and South Korea.

Here, FN looks back at her coordinating outfits. To see more monochromatic looks from Princess Diana, click through the gallery.

A Look Back at Princess Diana’s Postpartum Style