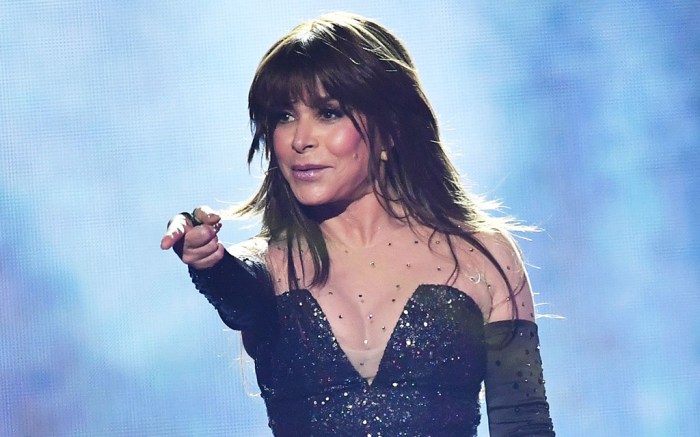 Paula Abdul sent her hat flying and Julianne Hough was the casualty.

During a performance of her many hits today in Las Vegas at the 2019 Billboard Music Awards, Abdul accidentally struck Hough when she threw the fedora in her direction, landing on the “Dancing With the Stars” star’s neck.

The result of the honor of being hit in the neck by @PaulaAbdul’s flying hat! Love you, babe!!! 💛💙💜 #BBMAs pic.twitter.com/wVDFQKsxBO

The flubbed dance move didn’t go unnoticed by Abdul, whose face tensed up before Hough looked at the camera and laughed it off.

Still, the show must go on. Abdul showed off her legendary quick feet throughout the venue, first making her way through the crowd, onto the stage and then onto a raised platform. Her outfit included a black bodysuit, fishnets and metallic pumps that had straps across the midfoot and ankle.

When @juliannehough wishes she was at rehearsals with @PaulaAbdul so she didn’t miss the hat toss 🎩 😂 #BBMAs pic.twitter.com/xTQtZJZjGp

Abdul is promoting her upcoming Las Vegas residency, “Forever Your Girl,” which begins in August at the Flamingo hotel and casino.

Ahead of her performance, Abdul walked the red carpet in a white suit dress with silver fringe embellishments and a pair of silver Christian Louboutin pumps.

Meanwhile, Hough arrived on the carpet in a head-turning ensemble that included an embellished silver jacket left open to reveal a bralette and short-shorts. Completing the outfit was a pair of nude patent Christian Louboutin pumps detailed with PVC trim and crystals throughout.

Taylor Swift performed her new single “Me!” with Brendon Urie, while BTS rocked the stage singing “Boy With Luv” alongside Halsey.

Kelly Clarkson hosted the show for the second year in a row and also performed, and Mariah Carey was honored with the Icon Award.

Click through the gallery to see celebs on the Billboard Music Awards red carpet.