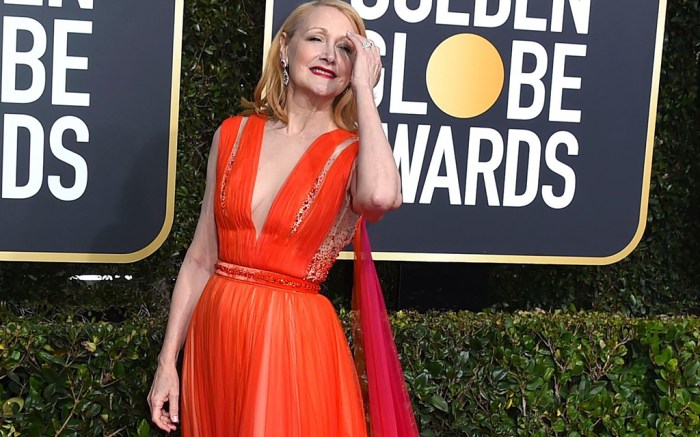 A front-runner at tonight’s 2019 Golden Globes is Patricia Clarkson. The actress is nominated for her role in HBO’s “Sharp Objects” in the Supporting Actress in a Series category, and her red carpet style didn’t disappoint.

The 59-year-old went couture for her big night, wearing a Georges Chakra orange ombré ensemble. The flowing chiffon embellished dress hid her Giuseppe Zanotti heels, which — are save to say — exceptionally tall.

Stylist Victor Blanco told FN ahead of the show, “For the shoes, she wanted something comfortable and high. She loves Zanotti, so I asked the brand for different styles that would match exactly what we wanted. I think we found it.” He added, “Shoes are essential for bringing a look together, but we didn’t want to take anything away from the gown, which is a stunner. We opted for a satin blush sandal.”

Clarkson had 35 shoes to choose from, according to Blanco, who said the actress tends to favor higher heels.

“The event is only a couple of hours so I believe in glamour above all else,” he added, noting that Clarkson needed eight looks for this awards season, so they tried on 20.

Click through the gallery to see more red carpet arrivals at the 2019 Golden Globes.