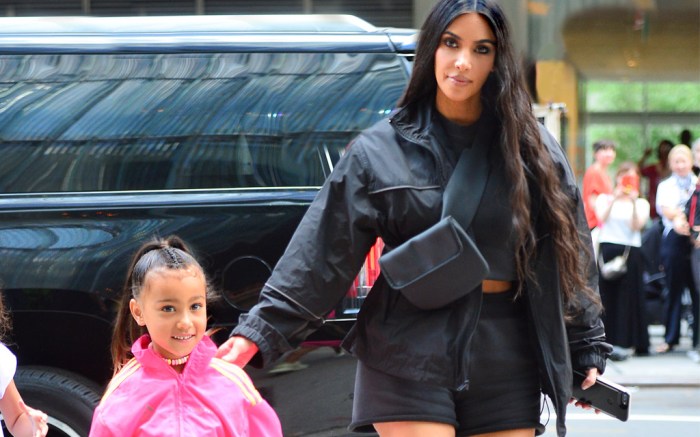 North West is following in her mom’s footsteps. Literally.

In a tweet that Kim Kardashian posted this morning, the 5-year-old is seen simultaneously trying on two styles of Prada’s buzzed-about (not to mention highly Instagrammable) flame wedges from the luxury brand’s fall ’18 collection. The shoes retail for $550. A neon-bright orange patent leather style is on one foot, while a highlight pink one is on the other. “North in my closet,” Kardashian captioned.

North in my closet ✨ pic.twitter.com/kAarAobhsP

Miuccia Prada introduced her flame-detailed “Hot Rod” shoes on the spring ’12 runway to complement a collection in which “fashion, fantasy and the promise of new discoveries collide.” There were sculpted wedges, stick-thin stilettos and pumps that got the vintage-car-inspired treatment, like a glossy paint job, tiny exhaust pipes, chrome accents and cut-out leather flames. They were met with instant fanfare, and a slew of celebrities, including Beyoncé, Alicia Keys, Katy Perry and Fergie, were seen stepping into the prized styles.

So last year, when the designer dipped into the archives, made the shoes over and sent them down the runway, it sent celebrities, editors and style influencers into a frenzy. Since then, the heels have been lighting up the street-style scene and the internet as seen on Kendall Jenner, Adwoa Aboah and now North.

It’s not the first time the toddler has shown interest in Kardashian’s footwear. In 2016, the reality TV star shared an Instagram of North posing in mom’s thigh-high silver Balenciaga boots. “Didn’t think it would happen this soon…my baby girl stealing my shoes. At least she has good taste,” she captioned.

Didn't think it would happen this soon…my baby girl stealing my shoes. At least she has good taste #Balenciaga 😂😂😂