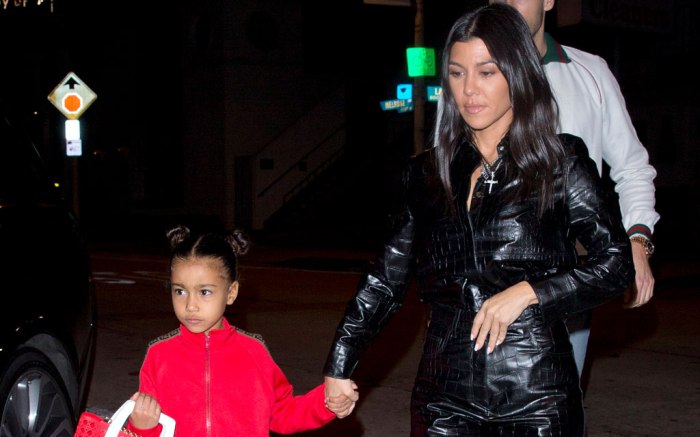 North West just may be the best-dressed kid around.

The 5-year-old stepped out in a head-to-toe Fendi look as she went to dinner at Craig’s in Los Angeles alongside aunt Kourtney Kardashian on Friday night.

West turned heads in a red Fendi tracksuit with the brand’s iconic logo detailed on the sides. The eldest daughter of Kim Kardashian and Kanye West kept the Fendi theme going with her footwear, opting for fluffy slides from the Italian label.

She wore her hair in Princess Leia buns and carried a red handbag with a golden chain.

Meanwhile, Kardashian opted for an all-black ensemble that contrasted with her niece’s bright red look. The “Keeping Up With the Kardashians” star wore a black snake-print button-down shirt tucked into matching pants. For footwear, she selected pointy-toed black boots on a narrow heel.

The mother-of-three wore her dark locks down, accessorizing with several silver necklaces.

While West has a designer wardrobe of her own, she got to play dress up in her mother’s closet yesterday morning. Kim Kardashian tweeted out an image of her daughter playing around in soaring Prada flame heels that retail for $550 a pop.

The famous child had on $1,100 worth of footwear, as she wore a hot-pink heel on one foot and a neon orange one on the other.

North in my closet ✨ pic.twitter.com/kAarAobhsP

Click through the gallery to see more of North West’s celebrity shoe style.