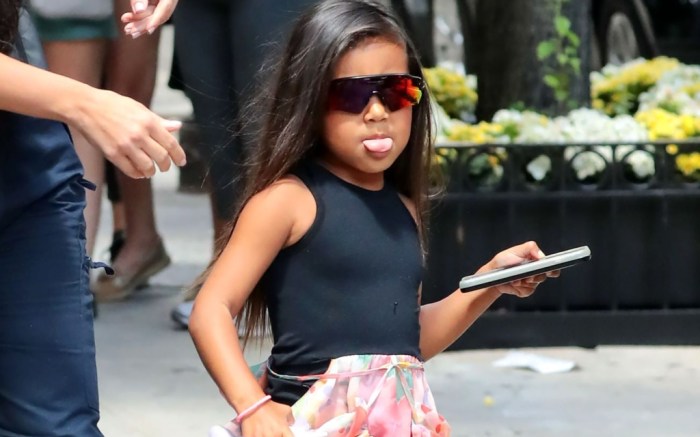 It looks as though North West has a different take on what Sunday best means. Instead of subscribing to the attire that’s expected of churchgoers (modest, conservative outfits consisting of ladylike dresses or nicely pressed clothing), the 5-year-old daughter of Kim Kardashian and Kanye West showed up to service on Sunday in a look that was equal parts goth and ’90s grunge.

In what turned out to be a dance session during which the entire congregation broke out in song and dance to West’s most popular hits, the fashion rule-breaker quickly found herself in the spotlight. Kim recorded North confidently stealing the show in one freestyle move after another.

Outfitted in a feathery thin-strap black dress, North upped the attitude with a pair of no-nonsense combat boots by Dr. Martens, slim-frame sunglasses, a high ponytail and black lipstick, which soon divided the internet (with many, unfortunately, taking to Twitter to mom-shame Kim).

But the potential fallout didn’t stop Kim from proudly posting videos of North dancing to “Power” and “Lift Yourself.” “Her favorite part of the week is dancing during Sunday Service,” she tweeted.

Her favorite part of the week is dancing during Sunday Service pic.twitter.com/yhiDhBqBY5

Baby Chicago also got in the holiday spirit: She was spotted in teeny-tiny neon green Yeezys that matched the little tassels on her dress and the clips in her hair.