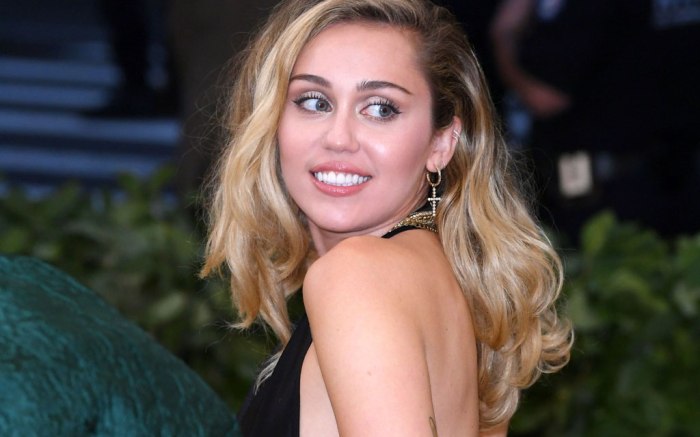 Miley Cyrus, like many other stars this month, is using up the last of the summer sun by vacationing in Italy. The “Mother’s Daughter” singer shared a few posts from abroad on Instagram, including one where she embraced flashy wares from high-fashion labels.

She posed in a pair of white pants topped with vintage Gucci layered gold belts; up top, she wore a crop top by Chanel that showed off her ribcage tattoo. She finished the look off with a black and gold oversized button-up and a hard-to-miss Chanel necklace.

Cyrus matched the embellished look with a set of custom metallic gold and black double-strap vegan sandals by Versace. They shoes came with a golden hibiscus print.

The 26-year-old also took to social media to demonstrate her dancing skills in a different post that showed her in a white bikini in front of scenic Italian water. Her husband, Liam Hemsworth, filmed her moves and can be heard voicing his support over the music.

The former Disney Channel star most recently released her EP “She is Coming” in May and is expected to release two more EPs, “She Is Here” and “She Is Everything,” before the end of the year.

It was also announced in June that Cyrus collaborated with Lana Del Ray and Ariana Grande on the theme song for the upcoming film remake of “Charlie’s Angels.”

The Converse collaborator has been vegan for years, and she embraces wardrobe pieces that are cruelty-free. In fact, at this year’s Met Gala she teamed a Saint Laurent minidress with a custom vegan leather version of the brand’s Paige platform sandals.

Versace, meanwhile, has ambitious goals under parent company Capri Holdings Ltd. In February, Capri chairman and CEO John D. Idol said he plans to turn Versace into a $2 billion-a-year business (in 2018, its revenues were approximately $890 million). The strategy includes amping up accessories and footwear categories from 35 percent to 60 percent of Versace’s revenues. The accessories rollout is expected to hit stores in spring 2020.

Click through the gallery to see Miley Cyrus’ style transformation over the years.

Miley Cyrus Takes on London in the Kookiest Outfit