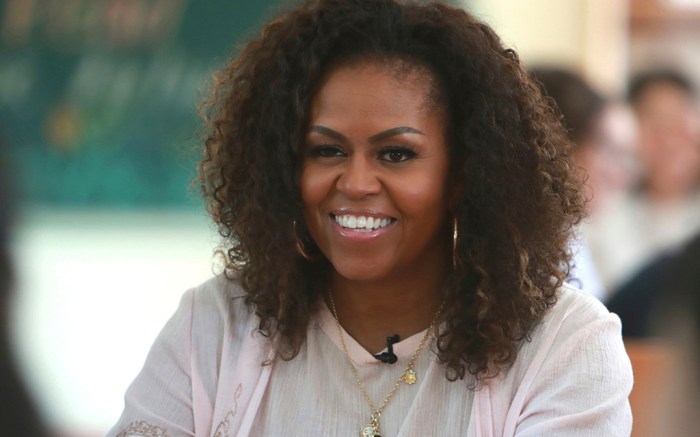 Michelle Obama showed off an easy, breezy style today during a trip to Vietnam, where she is raising awareness about the importance of educating adolescent girls.

The former first lady wore a pale pink set consisting of a crewneck blouse, harem pants and a printed cardigan today at Can Giuoc, a high school in Vietnam’s Long An province.

The slip-ons have a leather upper, a braided sole and a round toe. Sophia Webster’s signature butterfly accents the upper, with one wing embroidered across each shoe. Saksfifthavenue.com has the casual slides in stock for $325.

The Harvard Law School graduate was joined today by Jenna Bush Hager, Julia Roberts and Lana Candor. The next stop for Obama is Malaysia, where she will attend the Obama Foundation’s Leaders: Asia-Pacific Program conference.

As first lady, Obama was known for championing American designers like Jason Wu, Michael Kors and Tanya Taylor, as well as incorporating less expensive pieces from Gap or Target into her wardrobe.

“I wanted to draw attention to and celebrate American designers, especially those who were less established, even if it sometimes frustrated the old guard, including Oscar de la Renta, who was reportedly displeased that I wasn’t wearing his creations,” she wrote in her memoir, “Becoming.”

Click through the gallery to see more of Michelle Obama’s style.