Michelle Obama Does a Monochrome Look With Penny Loafers in Malaysia 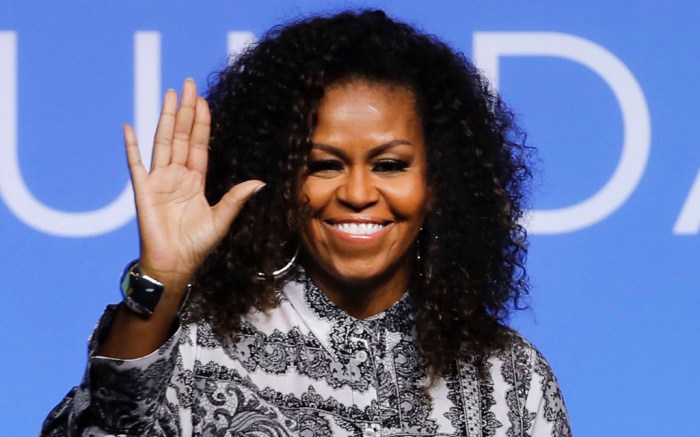 Michelle Obama took on the monochrome trend today, Dec. 12, at an event for the Obama Foundation in Kuala Lumpur, Malaysia.

While Obama has plenty of high heels in her wardrobe — including styles from Balenciaga, Jimmy Choo and Fendi — she opted for flat shoes to complete today’s look. On her feet, the “Becoming” author wore simple black penny loafers that appeared to be fabricated from patent leather.

The women are in Malaysia for the Obama Foundation’s first-ever Rising Leaders in the Asia Pacific event. In addition to attending the Obama Foundation engagement, Obama was joined by her husband, former President Barack Obama, for a community service event in Kuala Lumpur today.

Before arriving in Malaysia, Obama and Roberts touched down in Vietnam, where they visited a girls’ high school in Long An province on Dec. 9.

For the visit, the former first lady wore a pale pink outfit complete with rose gold, butterfly-adorned espadrilles from Sophia Webster. The shoes are available from Saksfifthavenue.com for $325.