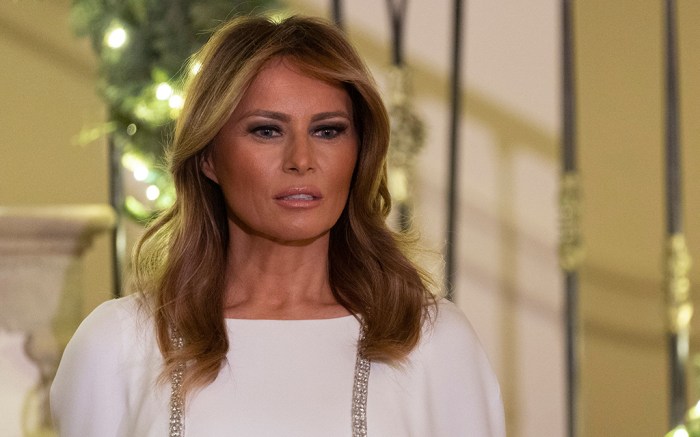 All eyes were on Melania Trump last night as she wore a designer look that had a touch of sparkle for the Congressional Ball in Washington, D.C.

The first lady joined her husband, President Donald Trump, for the occasion at the White House. She wore a white gown from Reem Acra that featured crystal embellishments. The cape-style silk-crepe gown retailed originally for $2,100 on Net-a-Porter.com but is now sold out.

The couple descended from the stairs to the Grand Foyer of the White House, where they spoke to attendees of the event in front of Christmas decorations that Melania herself helped organize.

Melania has been favoring cape-style dresses this week as she attended a Hanukkah reception at the White House wearing an all-black outfit by Givenchy.

For footwear, she went with Christian Louboutin’s So Kate pumps, one of her favorite styles. The shoes feature a 4.75-inch stiletto heel and Louboutin’s signature red-lacquered sole. The pumps are available on Nordstrom.com in the black patent leather colorway for $695.

Click through the gallery to see more of Melania Trump’s top shoe styles from this year.