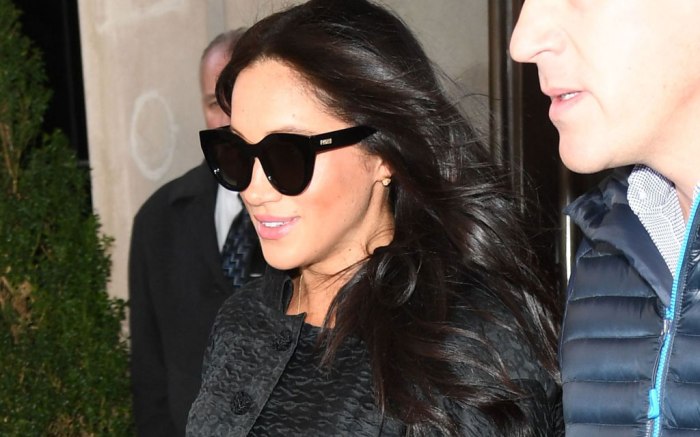 Meghan Markle made her return to the U.S. for a star-studded baby shower — and she’s continuing to show off her chic maternity style on the trip.

The Duchess of Sussex stepped out this afternoon for lunch in New York with “Suits” co-star Abigail Spencer clad in a sleek gray button-up coat paired with black skinny jeans.

For footwear, the former “Suits” star chose a pair of Stuart Weitzman’s suede nude Leigh pumps. The heels appeared to be about 3 inches high.

While it is typically protocol for British royals to select clutches for handbags, Markle went against tradition with a nude tote bag that neatly matched her shoes.

The Northwestern University alumna completed her look with dark sunglasses and a pair of simple stud earrings.

The 37-year-old is expecting her first child with Prince Harry this spring. The pair were married last May in a celebrity-filled ceremony where the duchess wore a Givenchy gown.

Spencer, meanwhile, looked chic in a red floral-print maxi dress, which she wore underneath a black parka. With respect to shoes, the 37-year-old went with black Western boots that appeared to be suede.

She accessorized with a gray beanie, a pair of dark shades and a black purse with shiny gold hardware.

More of Markle’s famous friends are expected to be on hand for her baby shower, which will reportedly be held at the Mark Hotel in New York.

Click through the gallery to see more of Meghan Markle’s maternity style.