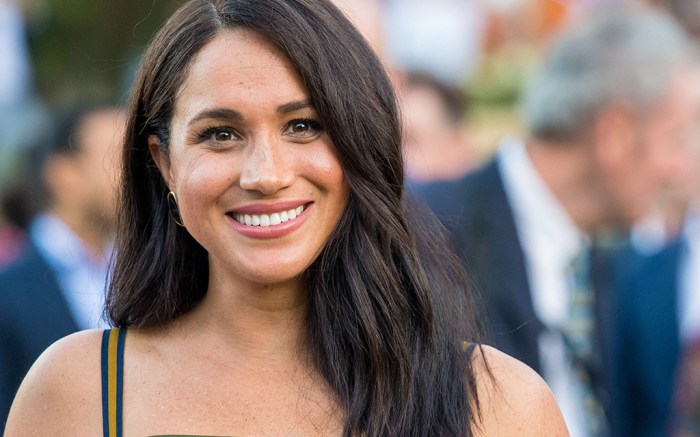 The world’s collective obsession with Meghan Markle’s style carried on in 2019.

In addition to style blogs and traditional media outlets covering each of her public appearances, the Duchess of Sussex also caused spikes in sales for the brands she favors, an effect that’s been cheekily dubbed the “Markle Sparkle.”

For roughly half the year, Meghan was pregnant with son Archie, who was born on May 6. Throughout her pregnancy, the royal continued to wear high heels, often choosing styles from favorites Manolo Blahnik and Aquazzura.

For instance, at the National Theatre in London this January, Meghan was dressed head-to-toe in monochromatic blush. She teamed a Brandon Maxwell spring ’19 dress with strappy, pointed-toe Aquazzura heels. The chic pumps are marked down 30% to $486.50 on Net-a-Porter.com.

On a late February trip to Morocco, the duchess switched things up a little. While her favorite Manolo style is the brand’s BB pump (a classic, pointed-toe shoe), she opted instead for polka-dot slingbacks on her last day in Rabat.

The BB made many appearances over the course of the year, including for Archie’s first public appearance in May, two days after his birth. Meghan teamed the pumps with a white, double-breasted Grace Wales Bonner dress on that occasion.

For a late September tour of South Africa, Meghan made a splash in a series of shirtdresses, leading to a 45% rise in queries for the category on Lyst. Searches for a Club Monaco dress the “Suits” star wore, teamed with navy BB pump, spiked by a whopping 570%.

While many of the duchess’ go-to shoe brands come with a high price tag, she also made several more affordable choices this year, from labels such as Adidas, Birdies and Sam Edelman. She wore the latter’s Sally ballet flats, which cost just $100 on Amazon.com, during the South Africa tour.

Although it’s uncertain what 2020 will bring for the duchess, several brands have long been her staple, such as Manolo and Sarah Flint. Those brands are likely to make repeat appearances in the new year.

Click through the gallery to see more of Meghan Markle’s style in 2019.