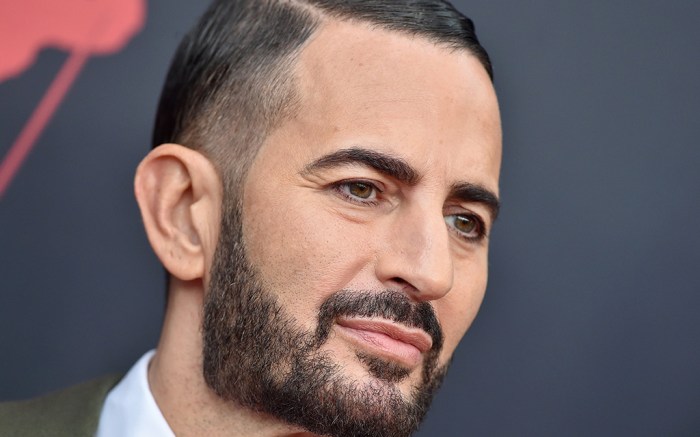 A few clicks of the the heels may not have brought him home, but Marc Jacobs still channeled “The Wizard of Oz” lead Dorothy with his ruby red slippers at last night’s MTV VMAs.

The toes of Jacobs’ jeweled red heels were barely visible — most of the shoe hidden underneath his pant legs — as he walked the red carpet at the Prudential Center in Newark, N.J. The designer wore an olive green suit from his eponymous label with a matching tie.

While fans got only the smallest glimpse of Jacobs’ shoes on the red carpet, he allowed a closer look on Instagram.

The Prada shoes featured crystal embellishment throughout, with a 4.3-inch block heel and a rounded silhouette. The pumps are available at Bergdorfgoodman.com for $1,100.

The shoes had a slightly higher heel than the pair Judy Garland wore as Dorothy, and Prada nixed the little bow that adorned the unforgettable style

This year’s VMAs marked a memorable career achievement for Jacobs, as he was awarded MTV’s first-ever Fashion Trailblazer Award. In addition to accepting the honor, Jacobs and his design team worked with MTV to develop a multimedia red carpet activation for the event, complete with a photographer.

The fashion icon was one of several celebrities to opt for an androgynous look on the red carpet, with other men also selecting outfits with heels, sequins and other feminine details.

Click through the gallery to see more of the celebrity arrivals at the 2019 VMAs.

In the video below, watch Carrie Dragshaw explain how to make a sparkly stiletto.