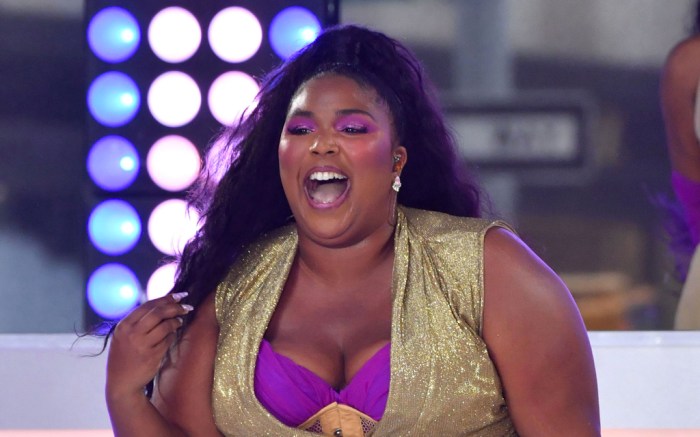 With her album “Truth Hurts” topping charts worldwide, Lizzo is one of 2019’s breakout artists.

This morning the songstress took to the “Today” show summer concert series stage in New York to perform hit songs like “Juice” and “Truth Hurts,” the lead single of the album. For her performance, she chose to wear a glittering gold bodysuit with a purple undergarment and fishnet leggings.

She continued with purple accents in her makeup as well as her footwear, wearing a set of pointed-toe metallic snakeskin booties. Designed on block heels, the boots were an excellent choice for the entertainer’s fast-paced moves. In fact, she showed her mastery of twerking while in the shoes.

Lizzo made a special entrance for the show, arriving in a vintage top-down convertible while dressed in a wedding veil, a common motif she’s used in performances before like at the 2019 BET Awards.

For the “Today” show performance, Lizzo also broke out her most famous flute skills on an instrument she named “Blue Ivy” after Beyonce and Jay-Z’s eldest daughter. Her other flute, “Sasha Flute,” is so famous that it has its own Instagram account.

Since Lizzo came onto the music scene, she also made a name for herself in the fashion and beauty realms. She appeared in recent ads for Urban Decay Cosmetics and also was featured on the cover of Love Magazine this month.

Boots Are Stomping All Over the 2019 BET Awards Red Carpet