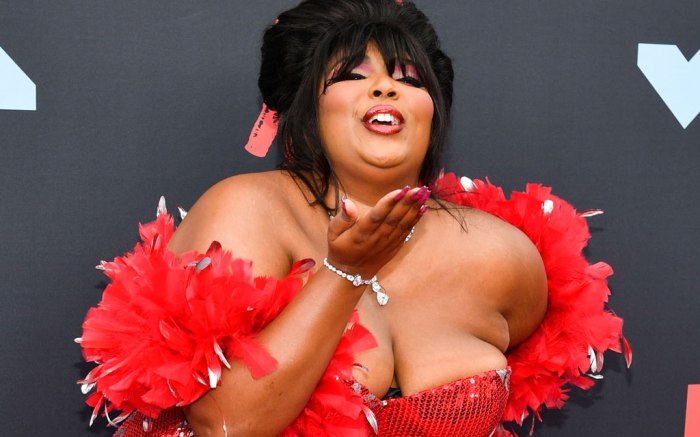 Lizzo is kicking butt and taking names this year — and she has no plans on slowing down. The singer, who is nominated for Best New Artist and is set to perform at tonight’s MTV Video Music Awards in New York, has garnered much attention for not only her music, but also her fashion. The “Truth Hurts” songstress isn’t afraid to push the envelope when it comes to her style.

For example, at the VMAs tonight, Lizzo is wearing a fierce red sequined dress with the word “Siren” emblazoned all over it. The outfit comes complete with a two-tone feathered boa and white sandals. Stuart Weitzman’s Nudist Stardust sandal features crystals around the toe and heel.

In general, Lizzo is known to take risks, using her platform to have fun with clothes, shoes and accessories. She makes a statement to say the least.

The entertainer often opts for glamour, wearing over-the-top neon ensembles. Take for instance her custom Marc Jacobs Met Gala look. She wore a dramatic feather cape in pink paired with a matching wig and bow sandals. She then wore that same feather piece to the airport the following day, proving she has no qualms about having outrageous style.

And among her go-to Dr. Martens, she’s a sneaker fan. Lizzo has been spotted in Gucci’s $1,500 jeweled kicks as well as an array of Nikes.

Click through the gallery to see more memorable fashion moments from Lizzo.

Why the Leopard Print Trend Will Never Die