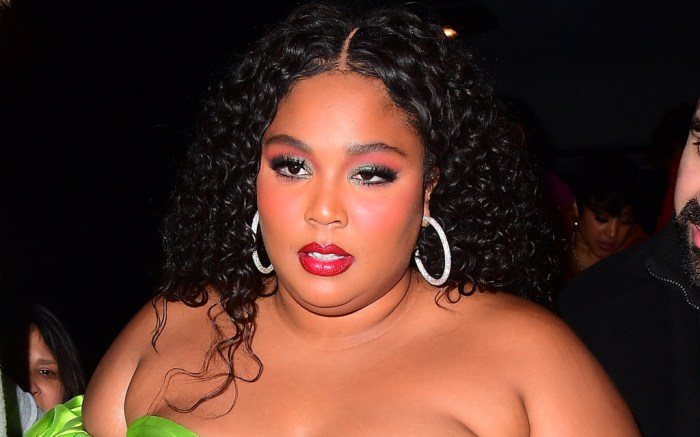 After performing on “Saturday Night Live” for the first time in her career, singer-songwriter Lizzo attended the show’s after-party in an on-trend look.

The “Good as Hell” hit maker headed to the New York after-party Saturday night wearing a lime green dress that appeared to be fabricated from satin. The dress had a low neckline and off-the-shoulder puff sleeves.

On her feet, Lizzo wore dramatic Femmes Sans Peur sandals covered in white ostrich feathers, with Swarovski crystals at the toe and a 4.13-inch heel. The open-toed silhouette showed off the star’s red nail polish, which together with her dress made for a festive look. The sandals are available for purchase on the brand’s site for around $700.

Lime green is one of the most popular colors of 2019, with celebrity fans that include Billie Eilish to Lil Nas X. The look-at-me shade has been worn on the streets, red carpets and, of course, Instagram.

Lizzo herself has worn lime green on the red carpet before, and like last night’s ensemble, her previous look featured feathers and white shoes. At the MTV Movie and TV Awards in Los Angeles in June, the “Truth Hurts” artist teamed a bright green Christopher John Rogers dress with white, crystal-accented Gucci Flashtrek sneakers.

It’s no surprise that Lizzo has embraced lime green, an undeniably attention-grabbing shade. The entertainer’s typical style includes bold hues and glamorous silhouettes. And in 2019, everyone’s been watching her. The songstress enjoyed breakout success this year, lauded both for her musical talents (she received eight Grammy nods for 2020) and for her statement-making fashion (her teensy Valentino handbag from the American Music Awards was a major Twitter moment).

Flip through the gallery to see how Lizzo’s style has evolved over the years.