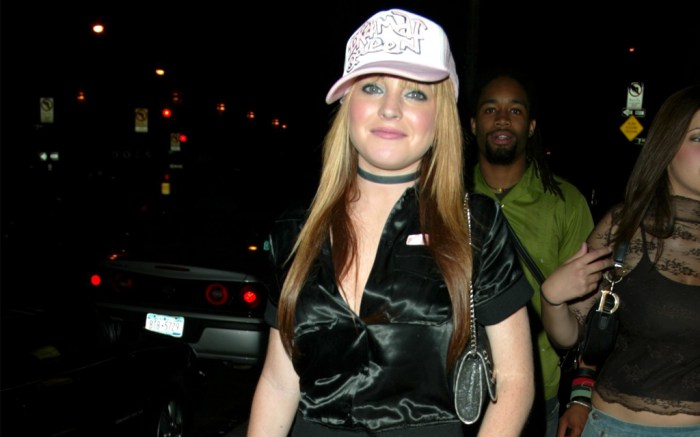 Lindsay Lohan is no stranger to the world of partying. From her frequent club appearances throughout her career to her current business venture opening hotspots around the world, it’s no surprise MTV picked up her new show, “Lindsay Lohan’s Beach Club,” debuting today at 8 p.m. ET.

With this experience on the party scene comes an experience in party style. For LiLo, it’s been a steady evolution since the early 2000s.

Complete with boot-cut jeans, a black crop top, a sparkly shoulder bag and a pink graffiti-style trucker hat, this look was all the rage. Her style was finished with a pair of pointed-toe black boots.

A couple of years later, the actress-turned-businesswoman showed a more mature side of her party style as she headed to a club in Cannes, France, in 2008.

Her all-gold ensemble matched her newly blond hair and tanned skin. Her heels were a metallic peep-toe that matched the look.

Two years ago, Lohan gained a new partying partner: Kourtney Kardashian. The duo was spotted out multiple times as they made their way around London.

While Kardashian went for a little black dress and thin-strapped heels, LiLo wore a colorful fringed dress with gold sandals.

Most recently, the MTV star attended the Third Annual Marquis New Year’s Eve party in New York. She went for a mature, all-black look finished with a set of over-the-knee black platform boots.