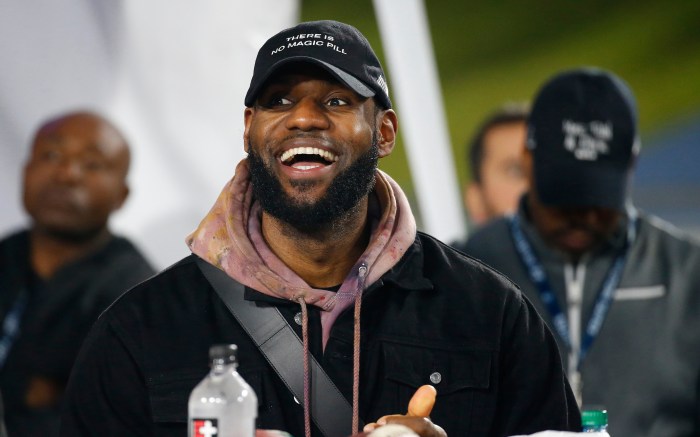 The Los Angeles Lakers star turns 35 today and is known for his on-court abilities and skills as he was named the Associated Press’ Top Male Athlete of the Decade yesterday. James also found success on and off the court in his collaboration with Nike in a series of sneakers that currently totals up to 17 different iterations over the past 16 years.

In addition to his unbeatable athleticism and impressive shoe line-up, the NBA favorite knows a thing or two about a stylish ensemble. To celebrate his big day, FN took a look at his best off-court looks this season.

While traveling between games, the 6-foot-9 athlete wore a black hoodie with a gray overcoat and ripped jeans as he pushed his shattered glass-like suitcase; his footwear was Nike Air Max 1 “Schematic Black.” He captioned the post on Dec. 3: “Rolling Stone aka Bron Jagger!”

Two days earlier, he topped off a relaxed look of black jeans, a graphic T-shirt and a leather jacket and a pair of black Nike x Off-White Air Force 1 with bright green laces.

On Nov. 11, he shared an ensemble fresh off the airport runway consisting of a Scooby Doo-inspired sweatshirt, Nike shorts and a set of Nike x Off-White Vapor Street “Tour Yellow.”

Behind the scenes, James kept it sleek in a black bomber over a T-shirt and black satin pants in early November; his shoe-of-choice was a set of white Nike Air Force 1 Low Supreme Comme des Garcons Shirt.

At the end of October, his outfit of the day was tailored pants with a jean jacket and clean white PSNY x Nike Air Force 1 High sneakers.

Click through the gallery to see some of LeBron James’ best on-court sneaker moments.