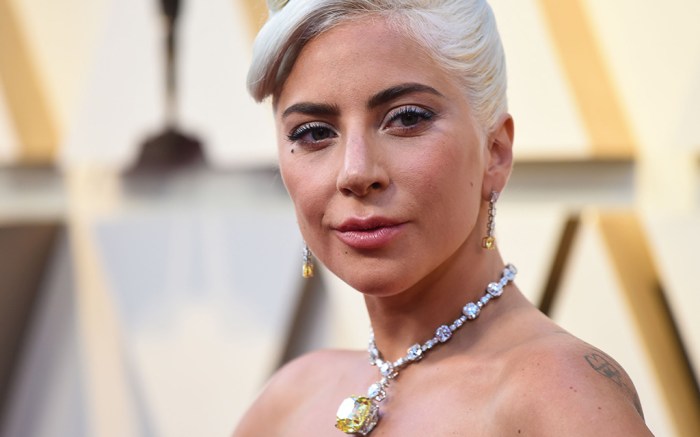 Lady Gaga is paying tribute to film stars of yore with her classic red carpet look at the Oscars in Los Angeles tonight.

The “Shallow” songstress looked like an Old Hollywood star from the ’40s as she stepped out in a shiny black gown by Alexander McQueen with a full skirt and unexpected hip buttresses. She teamed the dress with black leather gloves that went just past her elbows.

The “Million Reasons” singer accessorized with an elegant Tiffany & Co. necklace that features a massive 128.54 carat diamond. The necklace itself also has Old Hollywood vibes — and with good reason. The last person to wear the iconic piece was Audrey Hepburn, who donned it for a “Breakfast at Tiffany’s” shoot in the ’60s.

The star wore her platinum blond locks in a glamorous updo.

Gaga is known for her bold red carpet style — see her infamous meat dress at the 2010 MTV VMAs — but she’s gone with more understated looks this awards season.

Her most recent red carpet came on Feb. 10 at the Grammy Awards, where she sported a sparkly silver Celine gown with a thigh-high slit. On her feet, the “Applause” hitmaker sported towering silver Jimmy Choo sandals. While the look had an edgy-rocker style, it was a far cry from some of the more costume-like ensembles Gaga has pulled out for previous awards shows.

Click through the gallery for more Oscars 2019 celebrity arrivals.