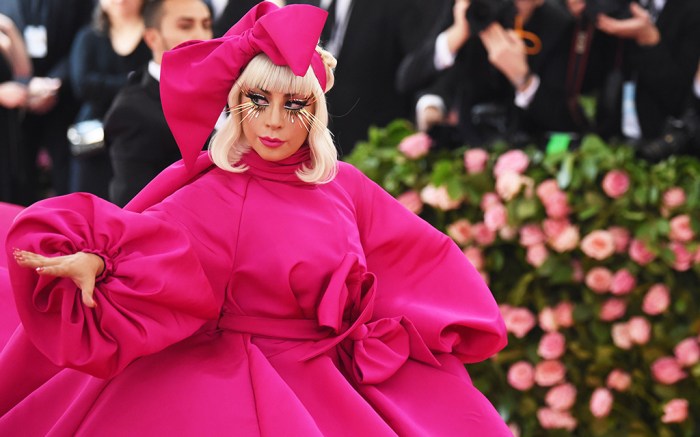 Lady Gaga has arrived at the Met Gala — and her look is as over the top as you’d expect.

The 33-year-old hit the red carpet at the Metropolitan Museum of Art in New York tonight wearing a dramatic parachute gown by Brandon Maxwell.

The dress featured a nearly endless train, which backup dancers carried for the “Born This Way” singer as she made her entrance. A tullelike black underlay was visible underneath the gown as attendants walked alongside Gaga.

She pulled together the bold outfit with an oversized bow in her hair and a doll-like makeup look.

But with a flair for the dramatic, Gaga quickly shed layers, revealing two more looks. The second was a floor-length black gown with a glamorous old Hollywood vibe.

The final was a vintage Gaga look worthy of an onstage appearance: a black bra and underwear set that showed off her Pleaser platform boots (they had a soaring 10-inch heel).

Her jewelry was from Tiffany & Co.

The songstress is one of the hosts of this year’s Met Gala, alongside “Sign of the Times” singer Harry Styles and 23-time Grand Slam tennis champion Serena Williams. The theme is “Camp: Notes on Fashion” — a play on a Susan Sontag essay from the ’60s.

“Camp is esoteric — a private code or badge of identity,” Sontag wrote in the essay, citing “Swan Lake,” Tiffany lamps and the art deco movement as examples.