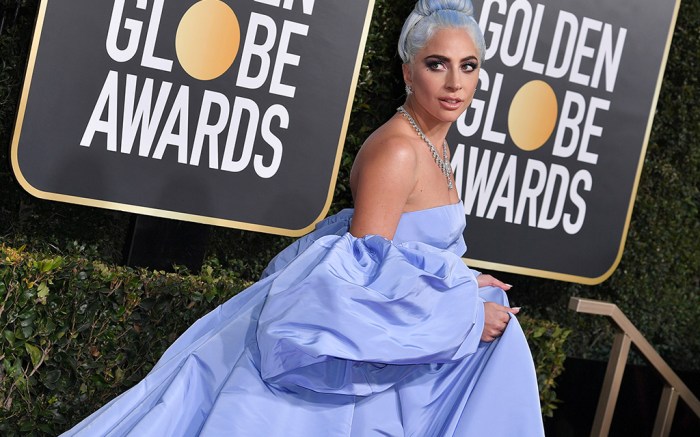 With massive hype surrounding her performance in “A Star Is Born,” Lady Gaga was one of the most-anticipated stars to appear on the Golden Globes red carpet in Los Angeles on Sunday.

And the “Bad Romance” singer did not disappoint with her ensemble. She hit the red carpet in a dramatic blue gown that looked straight out of a fairytale. The dress featured a dramatic train and strapless neckline.

The songstress wore her locks — which are the same color as the gown — in an updo. She completed her look with a diamond-covered necklace and giant earrings.

For footwear, Gaga selected soaring silver lace-up boots by Giuseppe Zanotti. The towering shoes remained mostly hidden beneath the star’s dramatic gown, but they added some height to her frame.

Gaga was already a Golden Globe winner coming into the night — she earned a statue for best actress in a limited series or made-for-TV movie in 2016 for her turn in  “American Horror Story: Hotel.” But the star has the opportunity to pick up two more trophies tonight for “A Star Is Born”: Best Actress in a Motion Picture and Best Original Song in a motion picture for “Shallow.”

In “A Star Is Born,” Gaga portrays Ally, a singer on the rise who falls in love with Bradley Cooper’s Jackson Maine, a country crooner battling addiction (Cooper also directed the film).

Click through the gallery to see more stars arriving on the 2019 Golden Globes red carpet.