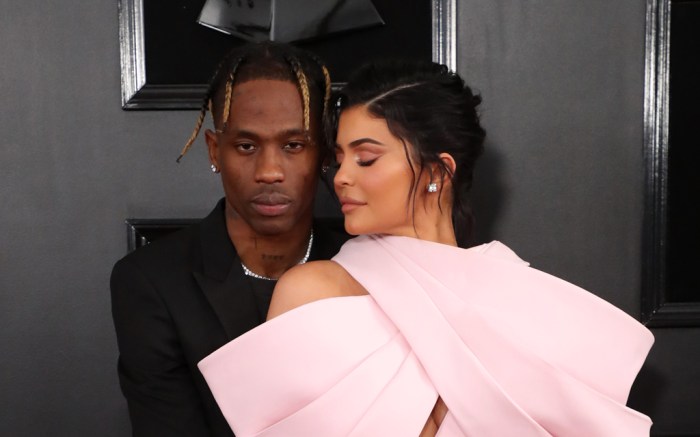 Leave it to Kylie Jenner and Travis Scott to show up fashionably late for the Grammy Awards tonight in Los Angeles. The couple arrived after live red carpet coverage ended but that didn’t stop them from pausing for a PDA moment for the cameras.

Jenner chose a baby pink jumpsuit for the occasion, complete with a structured, oversized top, a wide embellished belt and matching gloves.

Her shoes were a pair of cream heels that matched the belt of her look; the pointed-toe pumps popped out of the long hem of the pant.

Scott himself also went for a monochromatic ensemble, but his was a simple all black. His shoe of choice was a dressy patent loafer.

The parents made a quick turnaround from yesterday’s extravagant birthday party for their daughter Stormi, who recently turned one year old.

The celebration included an indoor carnival scene, live music, and various different rooms that all were inspired by Stormi and Scott’s Grammy-nominated album, Astroworld.

See all the celebrity arrivals at the 2019 Grammy Awards here.

Miley Cyrus, Cardi B, Camila Cabello and More Celebrities on the Red Carpet at the 2019 Grammy Awards