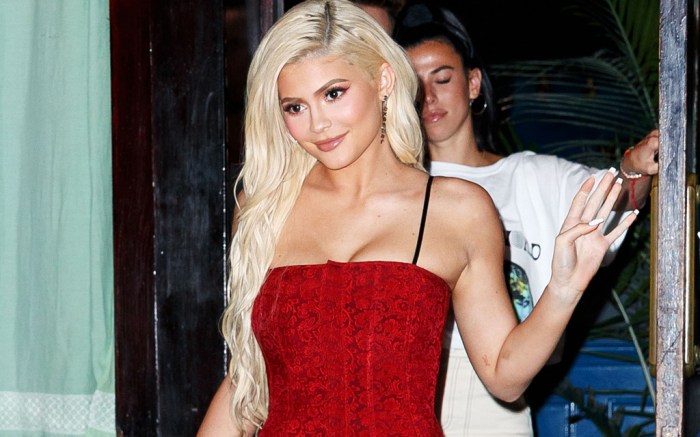 Kylie Jenner stepped out in the most daring red dress at the Clive Davis’ pre-Grammy Awards party in Los Angeles last night.

The 21-year-old wore a strapless red dress with a daring thigh-high slit. The dress, made by high-fashion label Ralph & Russo, featured a long train and ruffle detailing at the waist.

The Adidas ambassador completed her look with nude Christian Louboutin pumps. The heels featured a pointed toe and a stiletto heel.

She wore her raven-colored locks down.

At the event, Jenner’s beau, Travis Scott, performed two songs for the crowd. The “Butterfly Effect” rapper is up for three prizes at the Grammy Awards.

Jenner kicked off the day with an elaborate birthday party for her 1-year-old daughter, Stormi Webster.

The makeup mogul sported a baby blue suede suit with a white crop top underneath. For footwear, she chose logo’d Chanel sneakers.

i had to go all out for my baby. #StormiWorld

The “Keeping Up With the Kardashians” star dressed her daughter in a sparkly red sequined minidress.

“I had to go all out for my baby. #StormiWorld,” Jenner captioned the image, which racked up nearly 5.5 million likes.

Stormi’s elaborate birthday party had a “Stormiworld” theme, with carnival food, games and amusement park rides. She even had a kids’ music group perform “Baby Shark” while clad in elaborate costumes.