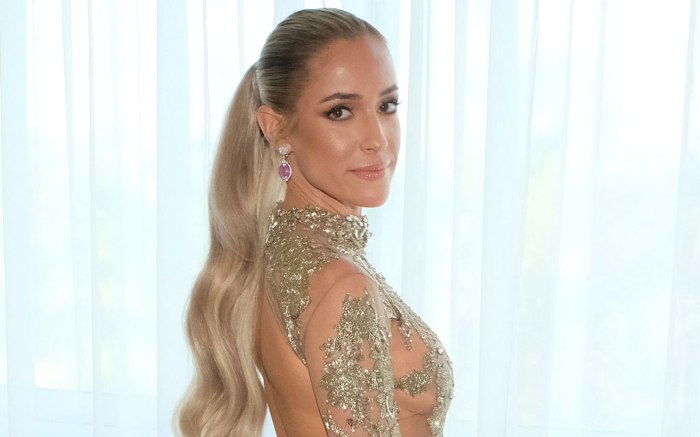 Kristin Cavallari hit the Golden Globes red carpet tonight in L.A. in a glamorous gold dress — but a lot of work went into getting her red-carpet ready.

The 32-year-old shoe designer was spotted getting ready as a crew worked on her look. As one woman worked on her hair, another appeared to be cutting loose threads from her dress.

The “Very Cavallari” star’s choice of attire? An embellished dress with sheer panelling and a high neckline that fit in perfectly with the “golden” theme of the night. The nearly-naked gown featured a sensual open back and long sleeves.

Cavallari wore her long blond locks in a ponytail, with pink drop earrings adding a touch of color to her otherwise metallic look.

The reality star had sky-high heels underneath the dress, which were just visible through the sheer skirt. The towering shoes were a wise choice —  adding extra inches to Cavallari’s frame and creating the illusion of longer legs.

In addition to allowing photographers a behind-the-scenes look as she prepped today, Cavallari took to her Instagram stories to show fans yesterday’s prep process — and it was an unexpected one. The mother of three revealed that part of her prep included a trip to Dripology L.A., where she got an IV.

Click through the gallery to see more celebrity looks on the 2019 Golden Globes red carpet.

How Much Is Kristin Cavallari Worth? A Breakdown of the TV Star’s Wealth