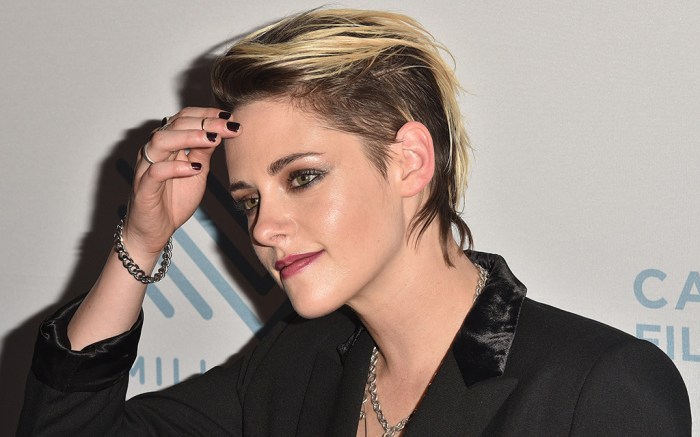 The 29-year-old actress wore a Sandro blazer with velvet detailing over black pants from Bella Freud ($469 on Matchesfashion.com).

Stewart rolled up her pants at the ankles, showing off black crew socks and a pair of patent leather lace-ups from Christian Louboutin. The shoes had an almond-shaped toe and a flat sole.

The “Charlie’s Angels” star added a feminine touch to her ensemble with a lace bra from Agent Provocateur (available on Farfetch.com for $187). She accessorized with layered jewelry from Jillian Dempsey.

Over the weekend, she went with a more relaxed casual ensemble at Deadline‘s The Contenders London on Oct. 5.

At the Deadline event, the “Twilight” alum wore a cropped gray T-shirt, cuffed navy pants and a baseball cap. The most dressed-down part of the look was Stewart’s shoes: a pair of paint-splattered Vans sneakers with a hole in the front of one shoe.

In general, Stewart is willing to experiment with her red carpet footwear, trying out anything from soaring stilettos to pointed-toe brogues. She’s even gone barefoot.

Click through the gallery to see Kristen Stewart’s best shoe styles over the years.