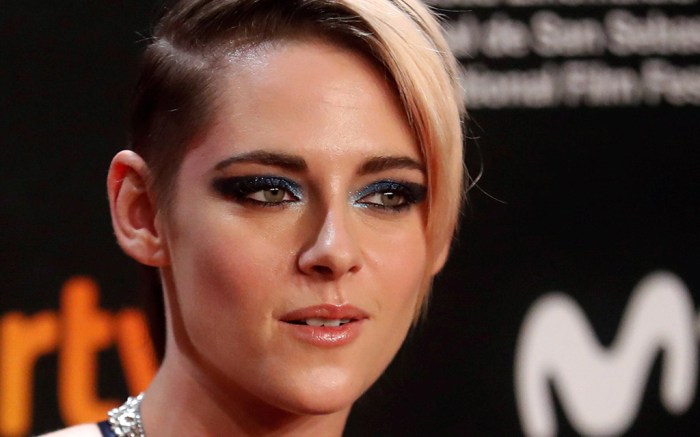 While promoting her newest film “Seberg,” Kristen Stewart has been showing off her versatile style — from day to night and punk to glam. In one day, the actress managed to wear three different dark-hued outfits at the launch of the 2019 San Sebastian Film Festival in Spain.

Stewart swept onto a red carpet in a sleek black gown with a high neck and cinched belt. Her pink-tinged hair fell to one side from a deep side part and her moody makeup featured a dark smoky eye.

Earlier today, the actress arrived at the premiere of her own film in a casual look, but with a touch of glam on her feet. For the big showing, she wore an edgy lace-up navy suit with white and gold details.

But before the glitz of the red carpet, Stewart’s first appearance of the day was at a photo call for the film, where she sported her most laid-back ensemble.

Wearing a leather jacket over an unbuttoned striped shirt and lacy exposed bra, the actress’ maroon socks peeped out from between her casual white pants and high-top Converse sneakers with contrasting olive green and black laces.

Click through the gallery to see Kristen Stewart’s best shoe styles over the years.