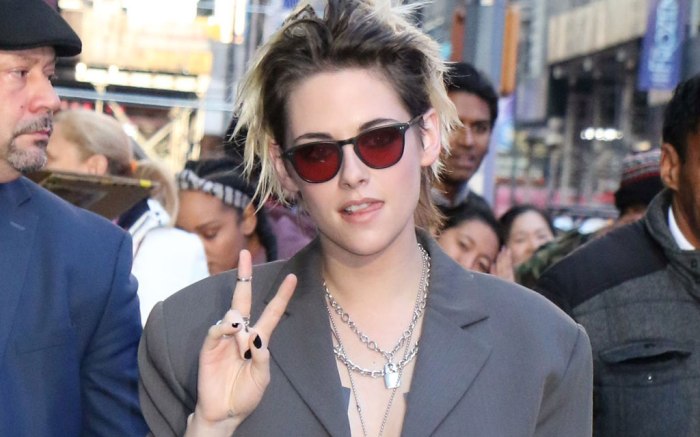 A pantsuit with power pumps may sound boring or businesslike, but Kristen Stewart proved the combo doesn’t have to be blah.

For an appearance on “Good Morning America” in New York today alongside “Charlie’s Angels” co-stars Ella Balinska and Naomi Scott, Stewart made a pantsuit surprisingly grungy — even with a pair of classic black pumps on her feet.

The “Twilight” alum wore a gray pantsuit that consisted of a cropped, asymmetrical jacket and wide-legged, ’90s-esque pants. The real coup de grâce was her shirt — or lack thereof: Stewart wore just a bra top under the jacket.

Though Stewart has a versatile shoe wardrobe — and often wears punkier styles like ripped sneakers or menswear-inspired brogues — today she chose simple stilettos.

Balinska had the same idea as Stewart with her pants, but the actress chose a more buttoned-up look on top: a double-breasted navy jacket and a pale blue blouse. The star kept it casual with her shoes, selecting white Nike sneakers with a gray velvet Swoosh.

Meanwhile, Scott looked stylish in a red leather set, consisting of a bomber jacket and high-waisted pants. The “Aladdin” lead opted for spiky red boots with a pale blue stripe to go with the fashion-forward look.

Click through the gallery to see more of Kristen Stewart’s celebrity shoe style.